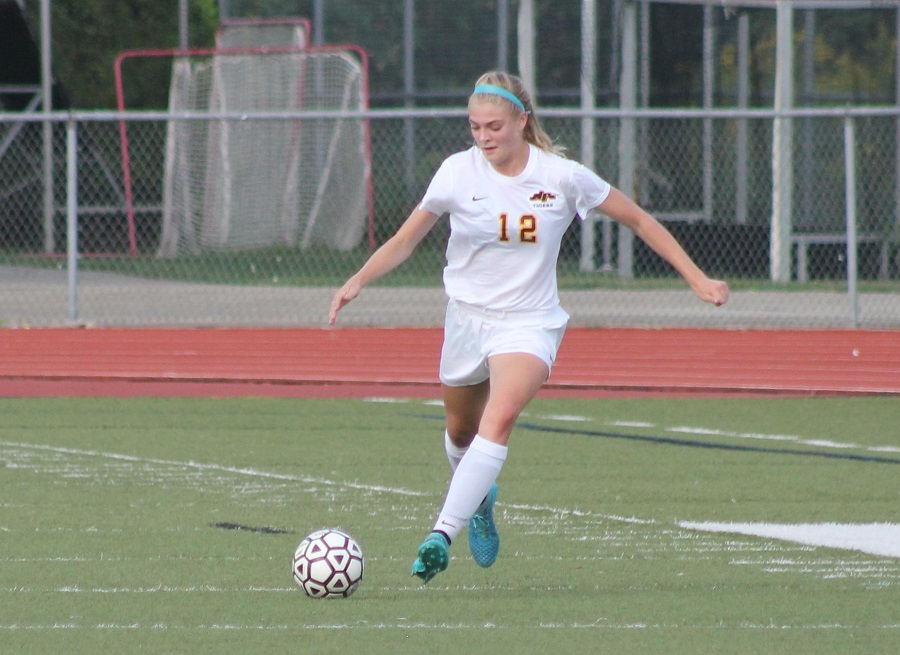 Lady Tigers Bow Out To Mt. Lebanon In 1st Round Upset

Mt. Lebanon won its first playoff game in five years on Saturday afternoon, outlasting the North Allegheny Lady Tigers in the opening round of the Class AAA playoffs, 3-2. The 11th-seeded Blue Devils’ upset of the host Tigers was the program’s first post-season win since Mt. Lebanon defeated North Allegheny in 2010 by a 4-0 decision. For North Allegheny, it’s the fourth straight season the team has made a first round exit.

On a grey and rainy day at Newman Stadium, Mt. Lebanon stormed out of the gates and put consistent pressure on the Tigers in the first 10 minutes of the game. That pressure resulted in three corner kicks for the Blue Devils, including a corner kick in the 11th minute that produced the game’s first goal on a header by Jess Wilhelm that caromed off the head of defender Natalie Rich and into the NA net to give Mt. Lebanon a 1-0 lead.

The Lebo lead didn’t last long, however, as the Tigers promptly struck back just seconds later. Gabby Smychynsky sent a free kick from 40 yards out into the box and Morgan Treser scored on a header to even the score at 1-1. For her efforts, Treser was named the Wright Automotive Player of the Game by the North Allegheny Sports Network.

The Tigers carried the momentum of the Treser goal through the remainder of the half and dictated the pace of the action. North Allegheny generated another golden scoring chance in the 31st minute off a corner kick by Marina Thornton, but the shot by Smychynsky was stopped on a great defensive save by Blue Devils senior Leah Graf to keep the score tied, 1-1.

After Mt. Lebanon’s goal by Wilhelm early the game, the Blue Devils did not manage another shot on net until the second half in the 58th minute when Laura Pryor took a ball from 30 yards out, beat an NA defender and calmly placed the ball past keeper Jessica Robles for a 2-1 lead. Less than three minutes later, Pyror collected a bouncing ball on a free kick, split two NA defenders, and again beat Robles for a 3-1 Mt. Lebanon lead.

North Allegheny turned up the intensity following Pryor’s second goal and was determined to get back into the game. In the 70th minute, Thornton served a perfect corner kick to Amanda Miller for a header goal to cut the Lebo lead to 3-2. The goal by Miller was her 12th of the season.

The Tigers continued to pressure the Blue Devils in the final minutes of the game but was unable to find the equalizer as Mt. Lebanon held on the for the upset, 3-2.

Mt. Lebanon improves to 12-4-2 and advances to the WPIAL quarterfinals to face south hills rival Upper St. Clair on Wednesday night. North Allegheny ends the season with a 12-5-1 record. Despite the loss, it was an exciting season for the Lady Tigers in which the team captured a share of the Section 2-AAA crown. Congratulations to coach Chuck Kelley and the Lady Tigers for a successful season.