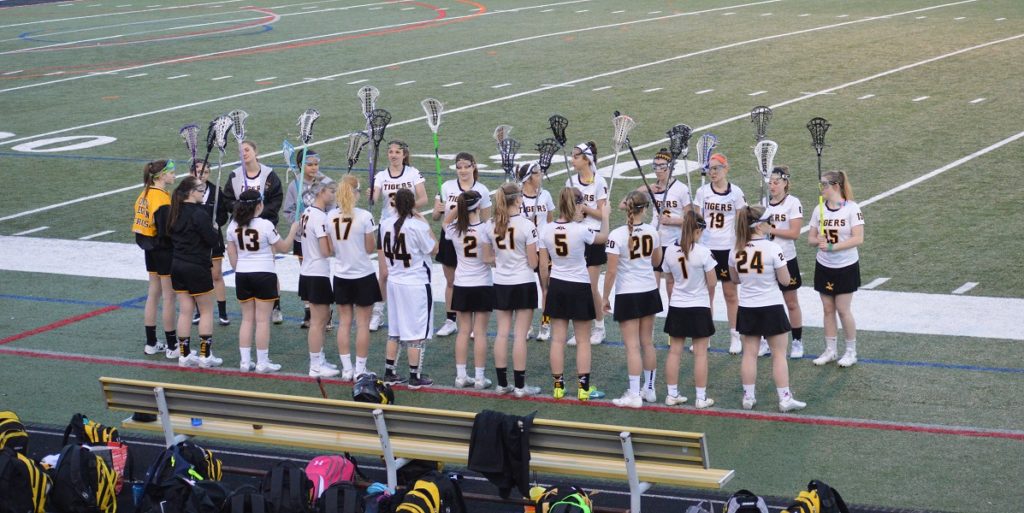 The North Allegheny girls’ lacrosse team opened up a 6-1 lead in the first half and fended a North Hills’ rally in the second half for an 11-9 triumph over the Indians at Newman Stadium. After winning only three games in the last two seasons combined, Monday night’s victory was already the fourth this year for a continually improving Tigers team. Senior Abby Washabaugh led NA with four goals and was named the Wright Automotive Player of the game by the North Allegheny Sports Network.

In the first half, North Allegheny dictated the pace of the game and controlled possession, opening up a five-goal advantage to start the contest. Washabaugh and sophomore Paige Jones netted two goals apiece in the first half, two of them coming while NA was killing off a penalty. Senior Jenna Prutting and sophomore Brooke Ferringer also tallied goals in the opening half.  North Hills struck for two goals in the first half on markers by Gianna DiPaolo and Carolyn Sawl as the scoreboard read 6-2, Tigers, at halftime.

Early in the second half, the Tigers were tagged with their fourth yellow card of the game and played a man-down for the remainder of the contest. North Hills took advantage and scored 4 of the first 5 goals in the second half and trimmed North Allegheny’s lead to just one goal, 7-6, with 17:10 remaining. Abigail Kunz totaled two goals for North Hills to spark the comeback bid, with goals by Julea Jamison and Sawl during that stretch. Jamison finished the night with four goals to pace the Indians.

Despite the Indians rally, North Allegheny responded with two quick goals from Washabaugh in just over a minute to steal back momentum and give the Tigers a 9-6 advantage. Caroline Palguta added another goal with 15:37 to play to increase the NA lead to 10-6. The feisty Indians fought back and cut the score to 11-9 with 7:27 remaining, but North Hills was ultimately staved off thanks to the NA defense and goalie Katie Shideler. Considering that the Tigers played a man-down for the vast majority of the second half, the NA effort was exceptional to capture the victory.

Along with Washabaugh’s four goals, Jones finished with a hat trick, Prutting totaled two goals and Ferringer posted a goal and two assists to lead the NA attack.

With the win, North Allegheny improves to 4-3 overall and 4-2 in Section 3-AAA. North Hills slips to 3-6 overall and 2-4 in the section. The Tigers will host the Shaler Titans on Wednesday night at 7:30 p.m. The game will be broadcast live via the internet on the North Allegheny Sports Network.