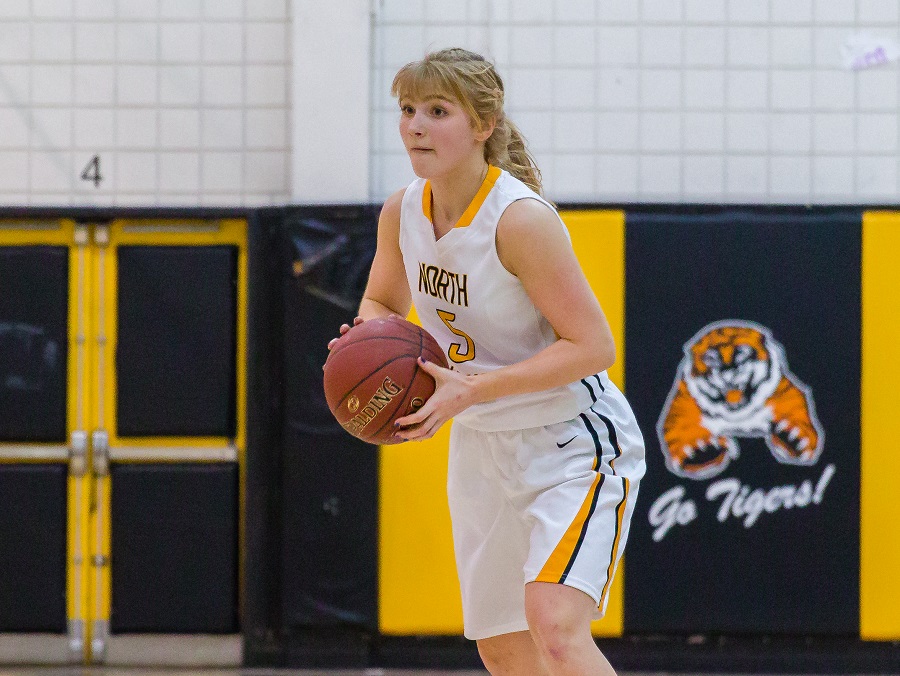 North Allegheny rallied from a 12 point second-half deficit to tie the game in the fourth quarter, but the WPIAL champion Norwin Knights staved off the Tigers for a 51-47 win in the state quarterfinals on Friday night. Norwin built a 36-24 lead with 4:02 left in the third quarter before the Lady Tigers staged a furious rally that was fueled by a bombardment of 3-pointers.

Freshman Piper Morningstar drained back-to-back treys to cut the score to 36-30.  Following a 1 for 2 trip to the free-throw line for Norwin’s Delaney Arbore, NA senior Devvin LaBarge knocked down a triple to cut the score to 37-33, Knights.  Norwin answered with a layup by Dom Petach, but again the Tigers hit from downtown on a 3-pointer by LaBarge to close the gap to 39-36 at the end of three quarters.

To open the fourth quarter, North Allegheny continued its surge and tied the game at 39-39 on free throws by Abby Gonzales (2 for 2) and Hailey Zeise (1 for 2). However, the Tigers never led in the second half and fell behind again on a 5-0 min-run by Norwin.  The Knights lead remained tenuous thanks to the continued hot shooting of LaBarge who finished with a team-high 15 points and was 5 for 8 from beyond the arc.  With all of her points coming in the second half rally, LaBarge earned Wright Automotive Player of the Game honors.

A LaBarge triple with 4:29 to play cut the Norwin lead to 46-45 but the Knights managed to outlast the Tigers for a 51-47 victory.  The Knights’ quick hands and scrappy play allowed them to win most of the loose ball situations, a trend that began at the opening tip and continued until the final buzzer.  Norwin was paced by William & Mary recruit Alayna Gribble who netted 13 points.  Amanda Batey added 11 points and was 3 of 7 from beyond the arc.

Along with LaBarge’s big night for the Tigers, NA was aided by the efforts of Gonzales who totaled nine points and five assists, and Piper and Meg Morningstar who finished with eight points each.

North Allegheny concludes the season with a record of 24-4 and a second straight appearance in the PIAA quarterfinals.  Norwin continues its banner year with a 24-4 record and a trip to the PIAA semifinals to face the reigning state champion Cumberland Valley Eagles. Congratulations to the Lady Tigers and the NA coaching staff for an outstanding 2014-15 season.