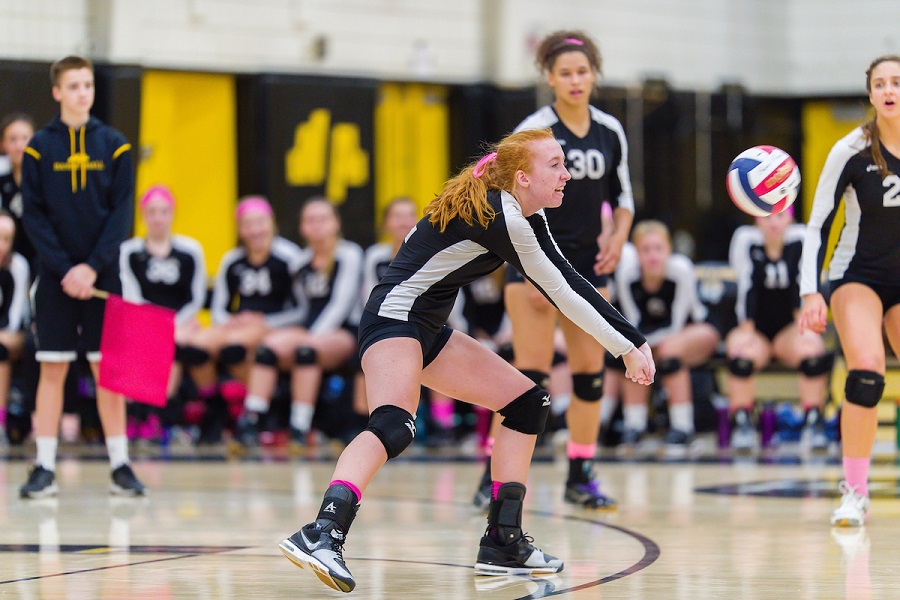 Facing a Pine-Richland team that defeated the reigning WPIAL champion Seneca Valley Raiders earlier in the week, the North Allegheny girls’ volleyball team captured an exciting 3-1 victory over the host Rams on Thursday night in Section 1-AAAA action. The win was the 10th straight for the Tigers over Pine-Richland in the head-to-head series. (The match was Video Streamed by the North Allegheny Sports Network via pay-per-view. To watch an archived broadcast for $5.00, purchase access in the broadcast box below.)

The top-ranked Tigers and the fifth-ranked Rams exchanged points in the early going with Pine-Richland holding a narrow 11-10 lead. North Allegheny rattled off an 8-0 run to take the lead thanks in large part to the efforts of Paige Miller, Kayla Dinkins and Paige Morningstar. Miller registered a pair of aces, Dinkins posted two blocks and a kill, and Morningstar scored on a block and a dump in the middle of the PR defense to build an 18-11 lead. From that point on, the Tigers controlled the opening set and cruised to a 25-17 victory.

The second set played out in contrast to the first with Pine-Richland using an extended run to take the lead. With the Tigers leading 7-6, the Rams unleashed a barrage of points for an 8-0 run and a 14-7 lead. Senior Zoe Sims sparked the run with three aces. Despite the deficit, North Allegheny charged back and tied the game at 19-19 on a monster kill by Dinkins. However, the Rams regained the lead and fended off the Tigers for a 25-22 win. Sophomore Anna Jurkovec provided plenty of firepower with four kills in the set, several of which for crucial points, to propel the Rams to the victory.

The showdown between Dinkins and Jurkovec took center stage in the third set. Dinkins, who finished with a team-best 14 kills and five blocks, peppered the Rams defense and helped NA take a 14-7 lead en route to a 25-20 triumph. Dinkins was named the Wright Automotive Player of the Match for the second straight broadcast.

The Rams seemed poised to force a fifth and decisive set by racing out to a 13-7 lead in the fourth game. However, Miller swung the momentum back toward the Tigers by scoring four of the next five points, including three kills and a block, to spark a 6-1 run to trim the deficit to 14-13, Rams. Miller totaled 13 kills on the night, second best among NA hitters. While North Allegheny narrowed the gap, the Rams extended the lead again to 20-17 and 24-22 with important kills delivered by Hannah Cottrill and Michaela Pettinato down the stretch. With Rams one point away from forcing a fifth set, the Tigers rallied and scored four unanswered points for a 26-24 win. The game-winning run began on a tip by Dinkins and was followed by a block by Morningstar to tie the score at 24-24. Two Pine-Richland mishits ended the night and gave the Tigers a 3-1 match victory. (For a video of the game-ending sequence, click below.)

North Allegheny remains undefeated on the season with a 6-0 overall record and a 2-0 mark in Section 1-AAAA. Pine-Richland drops its first section contest for a 1-1 mark. The Lady Tigers will host Seneca Valley on Tuesday night at 7:00 p.m. The match will be broadcast live (audio only) by the North Allegheny Sports Network.