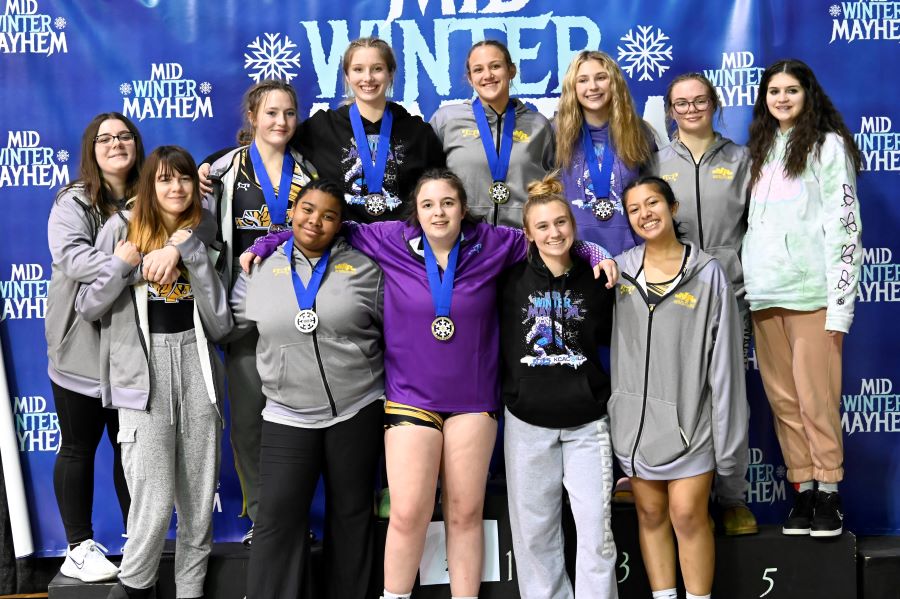 The North Allegheny girls’ wrestling took home a second-place finish at the Mid-Winter Tournament at the Kovalchick Convention Center at Indiana University of Pennsylvania. The Lady Tigers totaled a team score of 105.5.

Morrison’s run to Mid-Winter Mayhem gold began with a win by fall over Evangeline Gray of Canon-McMillan in 1:59. In the quarterfinals, Morrison picked up a 16-1 tech fall over Curwensville and followed with a 4-3 decision over Yana Noronha of Bishop McCort in the semifinal round. In the championship bout, Morrison matched up with Grace O’Korn of Canon-McMillan and earned an exciting 3-1 sudden victory.

Rumpler’s trek through the 152-pounds bracket started in the quarterfinals with a win by fall against Angelina Grieb of Bald Eagle in 2:45. In the semifinals, Rumpler pinned Canon-McMillan’s Dynasty Williams in 1:28 to reach the title bout. In the finals, Rumpler faced off against fellow PA National team member and #25 nationally ranked, Reagan Snider of Bishop McCort. The highly competitive bout ended with Snider countering a lake takedown attempt by Rumpler with 10 seconds left to win 5-1
At 235 pounds, Dean and Sanford took part in a round robin their weight class with both earning victories to start. Dean defeated Central Cambria’s Jaclyn Watson with a quick win by fall in 53 seconds and Sanford earned a 10-3 decision against Isabella Spotti of Fort Cherry. Going head-to-head, Dean edged out Sanford by an 8-3 decision before securing gold with a win by fall against Spotti. Sanford finished in second place following a win by forfeit in her final bout.
At 132 pounds, Folks earned two victories by fall before facing the returning state runner-up, Chloe Ault of Canon Mac, in the semifinals. Ault prevailed in a back and forth 4-2 win. Folks picked up another fall in the consolation bracket before earning a 2-0 decision over Hope Carmona of Canon-McMillan in the third-place bout to win tournament bronze.

Rautenbach and Collery each went 2-2 at the tournament and earned fourth-place finishes in their respective weight classes.

Also representing the Tigers at Mid-Winter Mayhem were Ava Anthony (132), Ava Frailey (145), Isabella Cuomo (114) and Maya Scott (152). For a full look at North Allegheny’s results at the tournament, click here.

North Allegheny looks to build off its second-place effort at Mid-Winter Mayhem with a home meet against the Seneca Valley Raiders on Wednesday night. The meet will be broadcast live by the North Allegheny Sports Network.