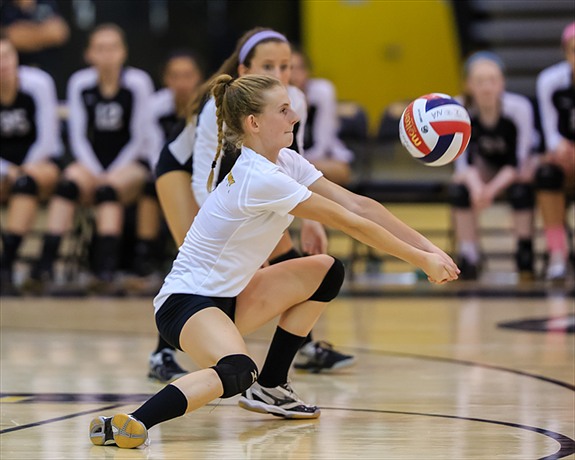 On the strength of a thrilling 29-27 fourth set victory, North Allegheny defeated Armstrong, 3-1, in the WPIAL AAA quarterfinals Tuesday night at Fox Chapel. With the victory, the Lady Tigers earned a spot in the semifinals Thursday evening against section foe Seneca Valley.

Tuesday’s match started out about as well as North Allegheny could have asked for, as the Lady Tigers never trailed in the first set en route to a 25-11 victory. Junior outside hitter Maria Mosbacher spearheaded the North Allegheny offense in that first game, notching six kills.

In the second game, however, the Riverhawks showed how they finished 14-0 in Section 4 on their way to a league crown. Led by senior outside hitter Justyne Lasher and her six kills, Armstrong built a 21-16 advantage and then hung on for a 25-23 victory to tie the match at one game apiece.

North Allegheny responded in the third set, cruising to a 25-15 win to set the stage for what would prove to be the decisive fourth set.

That fourth set seesawed back and forth until the two teams found themselves tied at 23.

North Allegheny senior right side hitter Lauren Swartz appeared to give the Lady Tigers the lead with a kill, but after a brief discussion, the referees awarded the point to Armstrong, citing what appeared to be an illegal substitution or rotation. North Allegheny coach Heidi Miller and the Lady Tiger players pleaded their case, though, and after a lengthy discussion involving both referees, both line judges, the official overseeing the match, and the consultation of a physical rule book, North Allegheny received the point and the lead.

Five match points later, the Lady Tigers clinched the match and the berth in the semis on a service ace by senior setter Beth Muhlenkamp.

Thursday evening’s semifinal match against Seneca Valley will be the third between the two Section 3 teams. The Lady Tigers defeated the Raiders on the road, 3-0, on Sept. 10 and then again at home, 3-1, on Oct. 6. Site and time of the match have yet to be determined.

Note: Statistics mentioned in this game summary are unofficial totals.