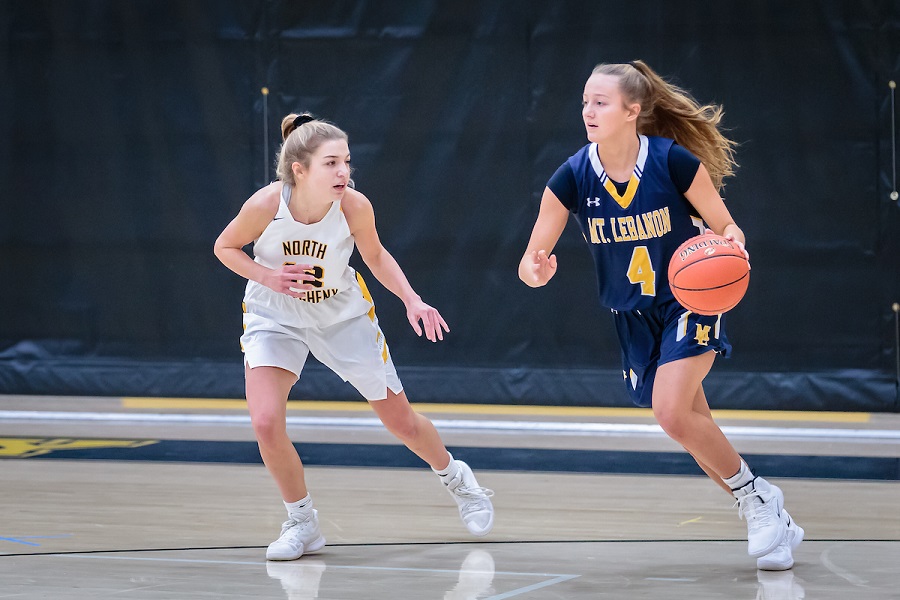 Mt. Lebanon controlled the action in the first quarter, opening the game on a 9-0 run, sparked by senior Nora Kogan with four points. The Blue Devils defense flustered the Tigers throughout most of the first quarter and kept NA off the scoreboard until senior Brooke Barcia poured in a 3-pointer with under two minutes to play in the quarter to cut the Mt. Lebanon lead to 9-3.

Mt. Lebanon held a 9-5 lead after one period of play, but North Allegheny found its rhythm in the second quarter and outscored the Blue Devils, 22-13, in the stanza. Groetsch spearheaded the effort with 12 of her 19 points coming in the first half.

Trailing 27-24 at the half, Mt. Lebanon started the second half with a 6-0 run to regain the lead, 30-27. Junior Patrice Smith netted five points during the Blue Devils’ spurt and finished with eight on the night.

With Mt. Lebanon holding a 33-29 lead, North Allegheny took control of the game with a 16-2 run to end the third quarter for a 45-35 lead. The Tigers’ 3-point shooting prowess sparked the run, including a trey by senior Brynn Serbin and two more from Barcia. Totaling 15 points in the contest with five connections from beyond the arc, Barcia was named the Wright Automotive Player of the Game by the North Allegheny Sports Network.

The Tigers coasted in the fourth quarter and outscored the Blue Devils 16-7 in the final stanza, en route to the 61-42 victory. Joining Groetsch and Barcia in double figures were Rachel Martindale and Paige Morningstar who each netted 10 points.

Another key component to the win was NA’s ability to keep Central Connecticut State commit Jamey Napoleon in check. The senior forward was blanked from the field, and scored only six points at the free-throw line. NA junior forward Katerina Balouris helped control the paint with several blocks on the day.

With the win, North Allegheny improves to 2-0 on the young season. Mt. Lebanon falls to 0-2. The Tigers will visit Fox Chapel in their first section game of the year on Monday night.