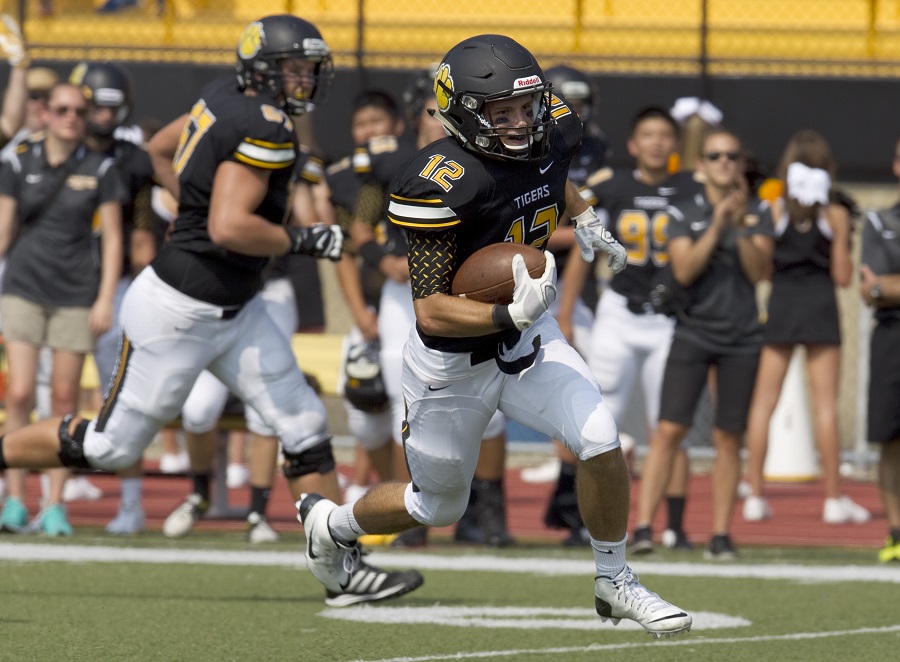 Tigers Rally For Win Over Seneca Valley In Opener, 34-24

North Allegheny rallied from a 14-0 deficit for a 34-24 Northern Eight Conference triumph over the Seneca Valley Raiders on Saturday. It was a day of adversity for the Tigers as NA not only had to overcome an early deficit but also played without starting quarterback Riley Trueman who was lost to injury late in the third quarter. Junior Ethan Maenza filled the void admirably as he orchestrated three fourth quarter scoring drives and punctuated the scoring with a 9-yard touchdown pass to Griffin Sestilli to finish off the Raiders.

Maenza rushed for 115 yards and passed for 41 more in the NA victory. For his efforts, Maenza was named the Wright Automotive Player of the Game.

It was Seneca Valley who burst out of the gates in the 2015 season with an 80-yard scoring drive that was capped on a 36-yard touchdown pass by Jack Cook to Cody Boozel for a 7-0 lead. After holding North Allegheny to a three-and-out, the Raiders marched 44 yards for a 14-0 lead thanks to a 1-yard rushing touchdown by Corbin Kessler with 5:10 to play in the first quarter.

After the Raiders opening salvo, the Tigers fired back in the second quarter with two scores of their own to tie the game. Michael Pope finished off a 71-yard drive with a 1-yard rushing touchdown, and on the next drive Maenza scampered 44-yards for a touchdown on a reverse with 1:58 before halftime to even the score at 14-14.

North Allegheny opened the second half with a lengthy 14-play drive that ate up almost half of the third quarter. The Tigers march stalled but senior kicker Seth Mancuso booted a 30-yard field goal to give the Tigers a 17-14 lead. The Raiders responded with a field goal of their own, a 32-yard connection by Dylan Grubbs, to even the score at 17-17 with 2:33 remaining in the third quarter.

Trueman exited the game late in the third quarter and Maenza took over at quarterback for the remainder of the contest. The junior promptly led the Tigers on a 12-play drive that was capped on a 1-yard rushing touchdown by Pope with 9:38 to play that pulled NA ahead, 24-17. Pope carried the ball 29 times for 106 yards and two touchdowns.

The resilient Raiders answered back with a 10-rushing touchdown by Kessler, his second score of the day, to knot the contest at 24-24. However, North Allegheny grabbed the lead for good on a 10-play drive that came to a halt at the Raiders 3-yard line. Mancuso again came through for the Tigers with a clutch 20-yard field to kick NA to a 27-24 lead with 1:02 left to play.

Seneca Valley’s last gasp was squashed on a first down sack by Jacquan Littlejohn for an 11-yard loss and the Raiders went 4 and out. The Tigers added a late touchdown by Maenza to finish the scoring as NA claimed the season opener, 34-24.

North Allegheny sits at 1-0 overall and in conference play with the win. Seneca Valley falls to 0-1. The Tigers will visit the reigning WPIAL champion Pine-Richland Rams next week.