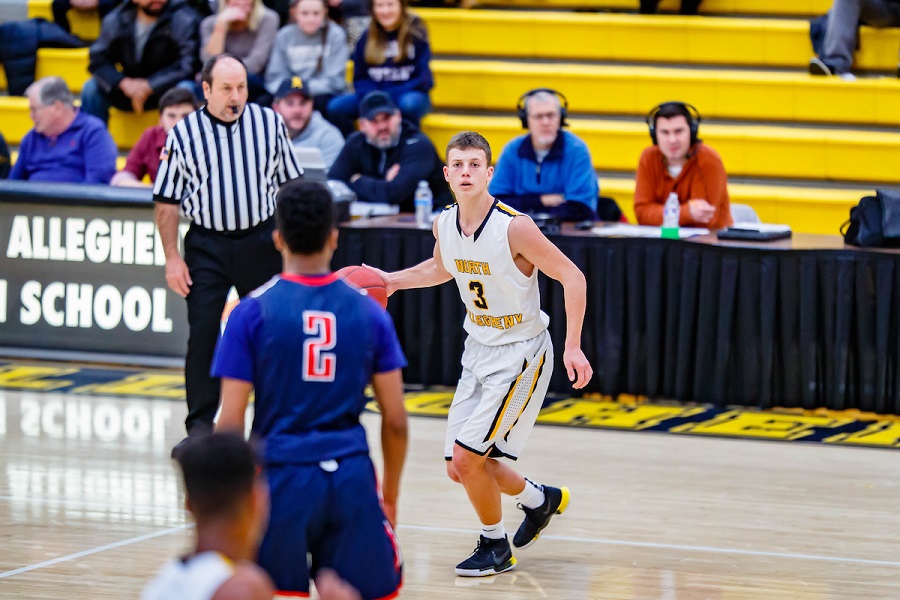 Junior Mike Egnaczyk’s 3-pointer at the buzzer propelled the North Allegheny Tigers to a 56-53 victory over the previously undefeated Franklin Regional Panthers in the opening game of the Wright Automotive Holiday Tournament. In a back-and-forth fourth quarter, the Tigers tied the game at 53-53 on a Curtis Aiken bucket with less than two minutes to play and won it on Egnaczyk’s heroic shot from the left corner.

The meeting between North Allegheny and Franklin Regional was the first since December 3, 2004 when the Panthers defeated the Tigers, 57-50. The Panthers entered Wednesday’s tilt with the Tigers as the third-ranked team in Class 5A and a perfect 6-0 record. In an effort to upend highly-touted Franklin Regional, the Tigers built a 14-point lead in the first half with hustle and dominance on the glass. NA outrebounded the Panthers, 21-9, in the first half and led on the scoreboard, 32-23, at intermission.

Franklin Regional’s up-tempo style helped chip away at the NA lead as the Panthers outscored the Tigers, 20-10, in the third quarter to take a 43-42 lead. Senior Hunter Stonecheck led the Panthers with 18 points on 7 of 10 shooting from the field.

The final eight minutes saw the teams leapfrog each other several times in an exciting final stanza. The Panthers used a 6-0 run, with all six points coming from senior Mike Bartolacci, to take a 51-49 lead. Bartolacci finished with 10 points for the Panthers.

The Tigers evened the score at 51-51 on two clutch free throws by senior Zach Johnson just moments later. For his consistent play throughout the game, and for delivering timely free throws under pressure in the fourth quarter, Johnson was named the Wright Automotive Player of the Game by the North Allegheny Sports Network.  Johnson added three steals and two blocks and was 5 of 7 from the charity stripe.

After Franklin Regional again took the lead at 53-51 with over two minutes to play, North Allegheny answered with the Aiken bucket and the Egnaczyk 3-pointer to pull out a thrilling 56-53 win. Aiken led the Tigers with 15 points and assisted on the game-winning trey. Senior sharpshooter Ray Sandherr tallied 13 points for NA, including 3 of 6 shooting from beyond the arc.

North Allegheny improves to 2-4 on the season, while Franklin Regional falls from the ranks of the unbeaten with a 6-1 record. The Tigers will play in the 8:00 p.m. game on Thursday night at the Holiday Tournament. The game will be broadcast live via the internet on the North Allegheny Sports Network.