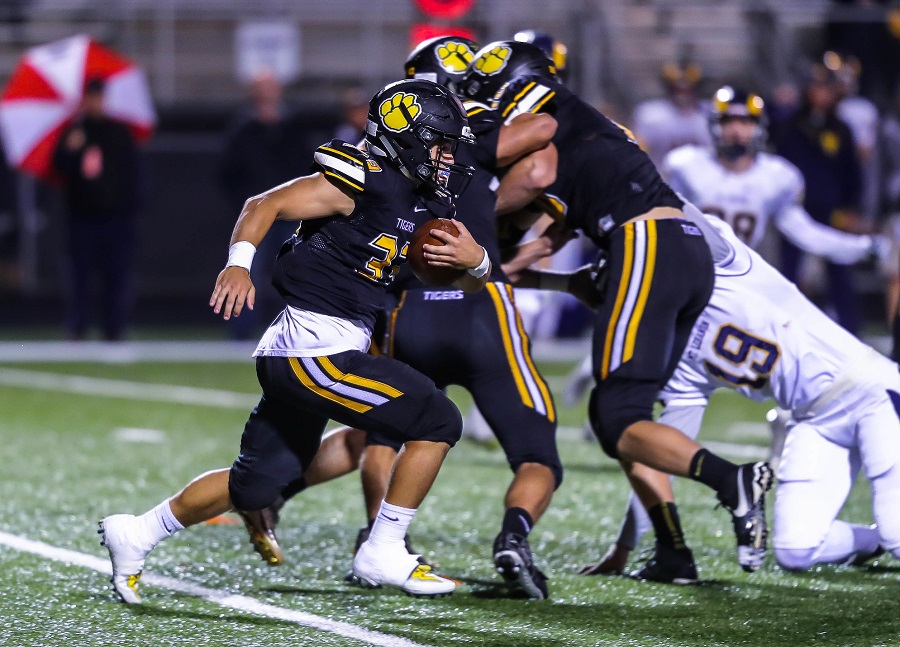 NA Advances To WPIAL Semifinals With 42-7 Win Over Hempfield

The second-seeded North Allegheny Tigers defeated the Hempfield Spartans, 42-7, in the Class 6-A quarterfinals at Newman Stadium on Friday night. Like they did when these teams met in week eight, the Tigers used an effective ground game and a bend-but-don’t-break defense to beat the Spartans. The win secures North Allegheny’s first appearance in the WPIAL semifinals since 2012.

On the opening possession of the game, Hempfield drove to the North Allegheny 5-yard line but came up empty on a 4th and 2, turning the ball over on downs. Two plays later, senior quarterback Ethan Maenza sprinted 95 yards for a touchdown to give the Tigers a 7-0 lead with 8:00 to play in the first quarter. The Spartans answered on their ensuing possession and scored on a 36-yard touchdown pass by Justin Sliwoski to Jordan Kempka to even the score at 7-7 with 5:38 left in the period. Later in the first quarter, North Allegheny regained the lead on a 2-yard touchdown run by senior tailback Mike Pope for a 14-7 advantage.

Again hoping to respond to the Tigers score, Hempfield drove deep into NA territory early in the second quarter. With Hempfield facing a 4th and 5 at the NA 12-yard line, the North Allegheny defense provided a tide-turning play when senior Niko Mermigas intercepted a Sliwoski pass and raced 99 yards for a touchdown and a 21-7 lead. The North Allegheny defense harassed Hempfield throughout the night and Cade Hoke was the ringleader, getting his nose to the football for 13.5 tackles and three sacks.

North Allegheny gained a strangle hold of the game in the second half with a power rushing offense that churned out 368 rushing yards and three more rushing touchdowns. Pope scored on a 5-yard run, and Turner White added touchdown runs of 31 and 43 yards to bring the final score to 42-7, North Allegheny. White finished the game with 101 yards and two touchdowns, earning Wright Automotive Player of the Game honors by the NA stat crew.

Winners of eight in a row, North Allegheny improves to 9-2 on the season and advances to the WPIAL semifinals against conference rival Seneca Valley. Hempfield ends the campaign with a record of 5-6.