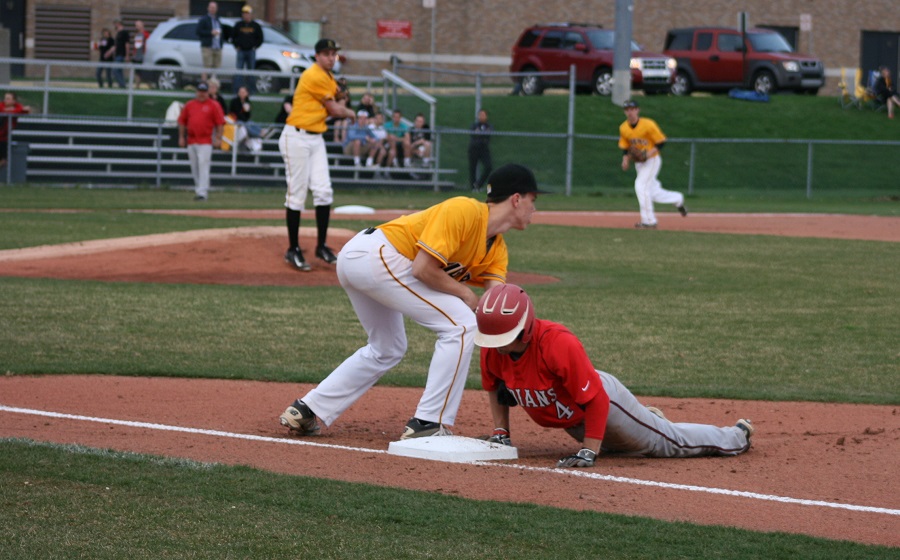 Constant rain showers throughout the week forced a rare day-night doubleheader for the North Allegheny baseball team with the Tigers playing host to North Hills in game one, and then taking to the road for a non-section affair against Howland, Ohio in game two. Unfortunately for the black and gold, the outcome was the same in both games as the Tigers were the victims of a doubleheader sweep, dropping game one by a 7-3 decision and falling in game two, 5-2.

In the morning contest at NASH, the rival Indians took a 3-0 lead in the top of the first inning, an advantage they never relinquished. The Tigers cut the score to 3-2 in the bottom of the second inning thanks to a North Hills error and a Garrett Hagen RBI single.  However, that was as close as the Tigers came to the Indians who pulled away with two runs in the third inning and two more in the fifth. Vince Ruggieri was the catalyst for North Hills with a 3 for 4 and four RBI performance. Brendan Burke earned the win for the Indians with 6.1 solid innings, allowing one earned run and striking out five.  Jake Fischbaugh suffered the loss for NA and was chased after three innings on the bump.

In the night cap, North Allegheny held an early 1-0 lead courtesy of an RBI groundout by Danny Caropresi that scored Chris Vrana in the first inning.  That lead held until Howland took charge in the middle innings. Howland scored two runs in the third inning and three more in the fourth for a 5-1 lead. Caropresi drove in his second run of the game in the seventh inning with a two-out single, but Howland yielded no more for a 5-2 non-section win. On the mound, Kenny Dorn took the loss for the Tigers, allowing five runs (three earned) in 3.2 innings.

Following the doubleheader sweep, the Tigers slip to 6-7 overall and 2-3 in section play.  North Allegheny currently sits in a tie for fourth place with Moon in Section 1-AAAA.  The Tigers look to bounce back with a section contest on the road at Butler on Wednesday night.  The game will be broadcast live via the internet on the North Allegheny Sports Network.