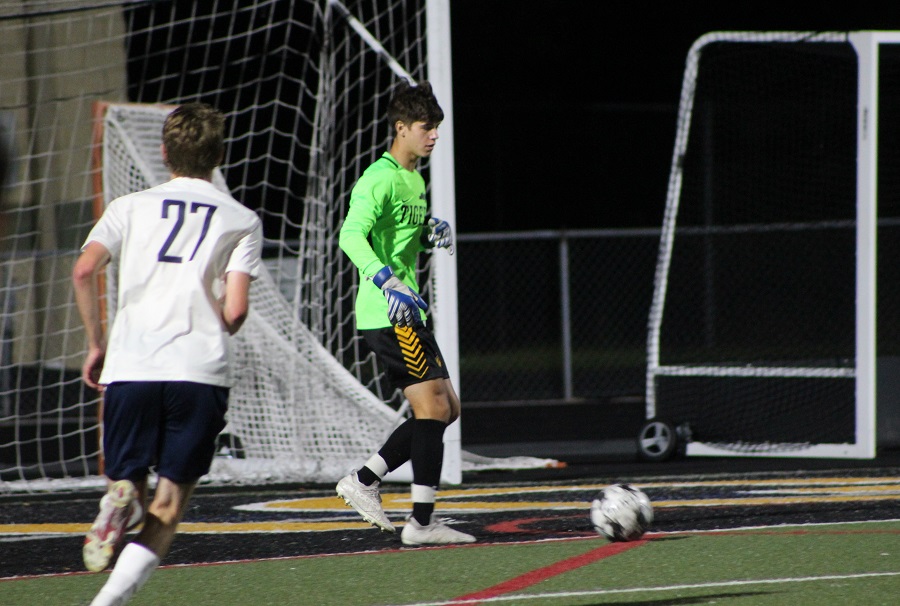 Atoning for an early season 1-0 loss to Butler on Sept. 16, the North Allegheny boys’ soccer team returned the favor with a 1-0 triumph on Tuesday night at Newman stadium. The win keeps the Tigers in a first-place tie with Seneca Valley atop the Section 1-AAAA standings. By blanking Butler, North Allegheny posted its fifth straight shutout and seventh of the season. The Tigers have not allowed a goal in over 220 consecutive minutes of game play.

In a tight game throughout, the Golden Tornado had two golden opportunities to take an early lead. With 26:44 on the first half clock, Butler junior Aiden Soley was denied on an incredible diving save by NA goalie Regan Racicot. Two minutes later, it appeared Tyler Gillis had given Butler the lead with a goal on the doorstep but the marker was disallowed by the officials.

Surviving two near-misses by the Golden Tornado, the Tigers scored the game’s only goal late in the first half. With crisp passing from Kensly Owens and Jonathan Swann down the left wing, Owens sent a crossing pass in front to David Lessure, drawing double team from the Butler defense. Lessure sent a pass to senior Phillip Iozzi who let loose a shot that beat the Butler keeper for a 1-0 lead with 3:41 left in the half. For scoring the game-winning goal, Iozzi was named the Wright Automotive Player of the Game.

In the second half, Landon Mohney nearly tied the game for Butler but hit the cross bar with 25:15 remaining in regulation. Mohney and the Golden Tornado continued to pressure the Tigers, even down to the final seconds of the game, but North Allegheny prevailed by a 1-0 decision.

North Allegheny leaps to 7-1-1 overall and 6-1-1 in Section 1-AAAA. Butler falls to 6-3-1 overall and 5-3-1 in the section. The Tigers will visit Shaler on Thursday for another section matchup.