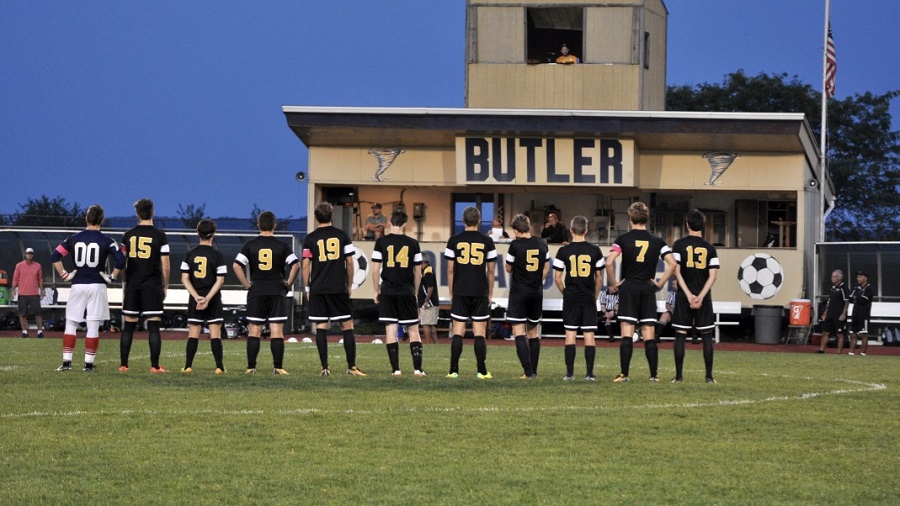 The NA Tigers traveled north to take on the Butler Tornado Tuesday evening and came away with an important 2-0 section victory.

The Tigers were aggressive from the opening whistle with the offense generating chances by Cam Yurick, and one minute later by both Josh Luchini and Ryan Earle, but were turned away by the strong goal-tending of Butler’s Andrew Chwalik.  However the Tigers broke through with 2:45 left in the first half as Luchini scored off a nice assist from Yurick to take a 1-0 lead at halftime.

The Tigers remained aggressive in the second half, generating a number of opportunities as Luchini hit the post and Chwalik denied Nico Ramirez on a shot from directly in front.  The pressure paid off when the Tigers netted an insurance goal with 8:11 remaining as Luchini scored on a header off a perfect corner-kick by Earle. In the meantime the Tiger defense held strong, limiting the Tornado to only three shots on goal the entire game.  Led by the defensive back line of Sam Neal, Nick Williams, Ethan Schenk and Luke Stephen, the Tigers held the dangerous Butler offense in check and preserved the shutout for keeper Grant Glorioso.

With the victory the Tigers are now 4-0 in section play and 7-2 overall.  The next game is Thursday at 7:00pm at Newman Stadium as the Tigers take on the North Hills Indians.  The game will be broadcast live via the internet on the North Allegheny Sports Network.