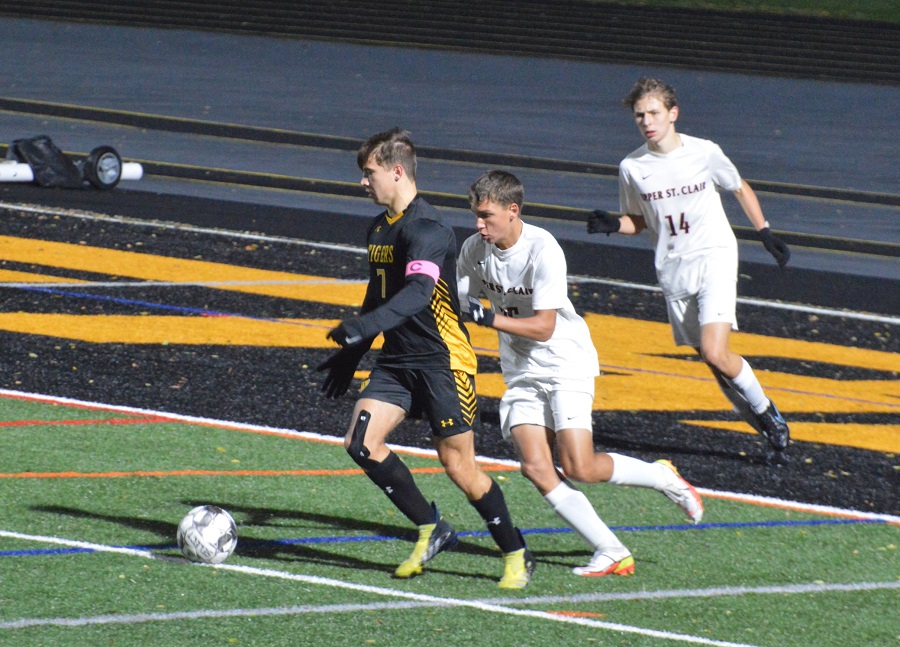 The sixth-seeded North Allegheny Boys Soccer program is headed to the quarterfinal round of the WPIAL Playoffs after topping eight-seeded Upper St. Clair 3-0 at Newman Stadium Tuesday night.

The matchup started off slowly for both teams, as light rain and wind played a factor throughout the contest.  Junior Ben Christian got the first good chance of the game less than 10 minutes in, but USC goalkeeper Dev Patel was up to the task to make the stop. With five minutes to play in the half, junior midfielder Gabriel Gotz took a shot from short range that was tipped away by Patel. Junior Kevin Luo also almost found the back of the net with less than a minute left in the first frame, but chipped the shot above the net off a pass from senior Connor Kaczmarek.

The Tigers kept the intensity up into the second half, as senior Evan Anderson scored just about five minutes into the frame. Great passing from senior defender Maanas Belambe, Christian and senior Matt Mihm, tic-tac-toe style set up Anderson.

Anderson found the back of the net once again with just over 13 minutes to play for a 2-0 lead. This time, the captain created a turnover with a steal 15 yards out, blasting the ball in the net towards the opposite post.  Senior midfielder Brandon Marzula capped the scoring when he took a one-time shot from 25 yards away and found twine, bringing the final score to 3-0.

Anderson was named the Wright Automotive Player of the Game for his efforts.

With the loss, Upper St. Clair falls to 6-9-2 overall and is eliminated from postseason contention.

The Tigers improve to 14-5 overall, and will face No. 3 Norwin in the WPIAL quarterfinals Saturday from Norwin High School. You can listen to that broadcast live on the North Allegheny Sports Network.