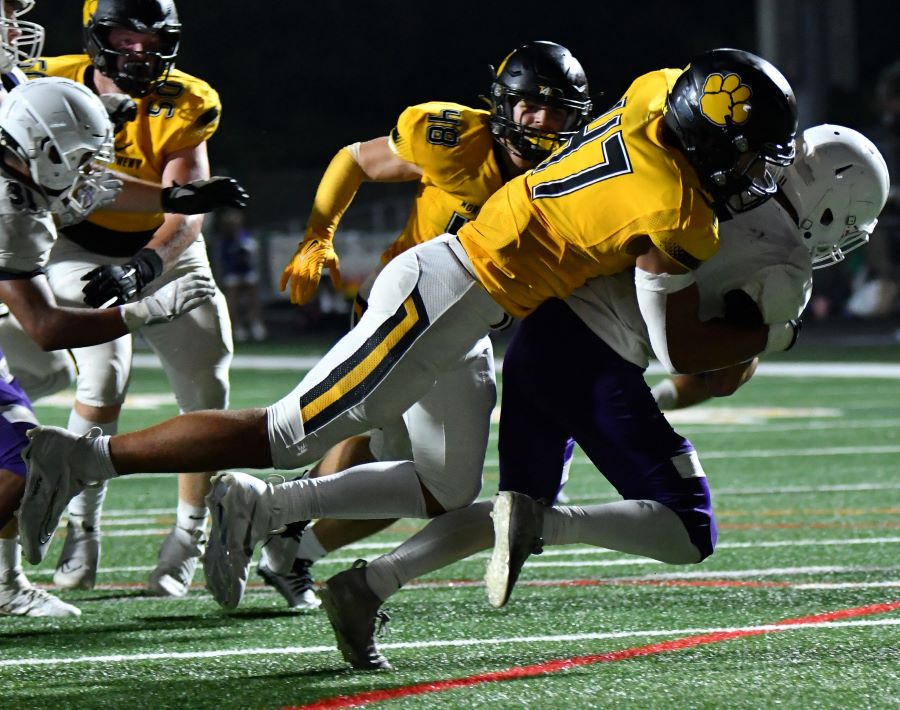 The North Allegheny Tigers won their fourth consecutive game on Friday night with a 53-7 blowout of Baldwin in a non-conference clash at Newman Stadium. The Tigers used a fast start and a strong finish to cruise to the victory. Junior quarterback Logan Kushner passed for 156 yards and accounted for four total touchdowns, passing for two scores and rushing for two more. The NA defense hounded Baldwin quarterbacks with seven sacks and added an interception.

The Tigers built a 26-0 lead by the early stages of the second quarter and opened the scoring on a 5-yard touchdown pass by Kushner to senior receiver Anthony Varlotta with 8:25 left in the first period. Four minutes later, a blocked punt set up Kushner for a 1-yard scoring run and a 14-0 lead. Following an interception by junior defensive back Khiryn Boyd, the Tigers capped a six-play, 45-yard drive with a 27-yard touchdown reception by Varlotta on a screen from Kushner for a 20-0 lead with 2:44 left in the first quarter. The extra point attempt failed.

Just 32 seconds into the second quarter, Kushner scored on a 1-yard QB keeper for a 26-0 advantage. The two-point conversion attempt failed.

From that point on in the first half, the Tigers’ momentum hit a lull and the Fighting Highlanders capitalized with a 41-yard touchdown run by junior quarterback John Kozar with 6:39 remaining in the half to trim the score to 26-7, North Allegheny.

North Allegheny got back to basics in the third quarter and increased the lead to 33-7 on a 33-yard touchdown run by Boyd with 8:01 on the clock. Boyd accounted for 120 total yards, including 87 receiving on four catches, and was named the Wright Automotive Player of the Game. He also added an interception on defense.

Later in the third quarter, senior running back Andrew Gavlik busted off a 49 yard run to the Baldwin 1-yard line to set up NA’s next score. On the next play, senior Steve Palermo toted the ball into the end zone to swell the Tigers advantage to 40-7 with 5:39 on the clock. Gavlik paced the ground game for NA with 13 carries for 97 yards.

With 1:29 left in the third, Harron Lee reeled in a 9-yard touchdown pass from sophomore quarterback Colman Craft to invoke the mercy rule with a 46-7 lead. The extra point attempt failed.

Craft added the cherry on top of the blowout win with a 92-yard touchdown run with 4:10 left in the fourth quarter to bring the final score to 53-7. The scoring run by Craft was the longest by a North Allegheny player in six years. In 2016, then-quarterback Ethan Maenza raced 95 yards for a touchdown against Hempfield in the opening round of the WPIAL playoffs.

In a one-sided affair, North Allegheny outgained Baldwin, 417-126. Of the seven sacks by the NA defense, junior Aidan Buggey led the team with three sacks. Senior Nick Berarducci added 1.5 sacks, while Daniel Sellers and Brody Thomas posted one sack each. Junior Cameron Chmura chipped in with a half-sack.

With the win, North Allegheny improves to 4-0 overall, while Baldwin slips to 1-3 on the season. The Tigers return to conference play next week with a matchup against Pittsburgh Central Catholic.