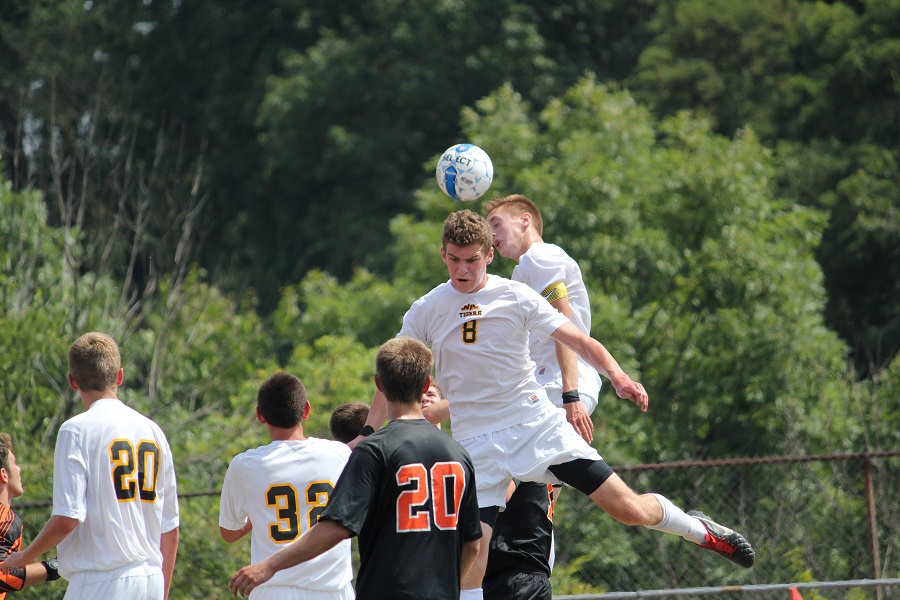 The NA Tigers Boys’ Soccer Team began their 2013 regular season with a 2-1 non-conference win against Erie Cathedral Prep on Saturday.  The contest started out slowly with the first 10 minutes, a back and forth affair with each team finding their rhythm.  The NA defense including Steve Binnig, Andy Mahler, sophomore Nick Thornton and senior Alex Dorazio pressured Cathedral Prep nicely early on with the off side trap yielding three early offside calls.

The first shot on goal came in the 11th minute by senior midfielder Andrew Earle, from an outside foot flick pass from senior Nick Jewell.  Strong goalkeeping by Erie’s Mike Stark held the shot out.

The game picked up pace as in the 15th minute senior NA midfielder Peter Tobias received a nice pass from senior Sean Dickerson on the left wing and put the ball on net with a powerful shot. The keeper made a punch save with a strong rebound shot attempt by Earle flying wide slightly to the right.  Shortly later a nice pass from Michael Peters to Jewell allowed a left outside foot shot again stopped by Stark

The scoring for NA got started in the 18th minute with a nice assist from the right from Earle to Dickerson.  A 24 yard one touch rocket by Dickerson gave the Ramblers keeper no chance and gave the Tigers a 1-0 lead.

Good defensive work by Binnig on the left and a strong stop on a 1 v1 run by Erie’s Nick Paglia again held them out. The game continued back and forth with Erie being troubled by multiple offside calls

In the 35th minute Cathedral Prep struck back with a breakaway by senior forward Teddy Martin. Nolan stopped a sure goal, but in the process was yellow carded and a penalty shot was awarded.  ECP converted the kick and tied the game, 1-1.  The teams continued to battle until the half.

The action picked up early in the second half with NA starting on a strong cross in the 43rd minute from Dorazio to the far post just reached by ECPS keeper to take away a nice scoring chance by senior forward Duncan Riding. After a nice hard 25 yard shot by ECP midfielder Antonio Simora was stopped in the 47th minute, NA answered with strong shots from Mahler and junior forward Bobby Upton.

Jewell then pressured down the left wing with a 1 v1 on the keeper, stopped at the goalmouth.  Shortly after a 22 yard hard shot by Jewell sailed just over the crossbar, Jewell followed two minutes later with another long shot, this time finding the upper outer net for a goal and a 2-1 NA lead.

Continued pressure from the NA offence yielded a few more shots and cross bars but no additional goals.  A strong threat on a cross from the right wing came in the 72nd minute with a defensive header by senior defender Zack Nimmo.

Peters offered strong minutes and some dangerous runs in the last ten minutes.  Junior Kevin Dougherty also displayed 1v1 skills with nice footwork earning NA a later corner in the 77th minute at a point in which ECP was threatening. The defense held nicely, never breaking and allowing the NA Tigers to capture a win in their first regular season game.