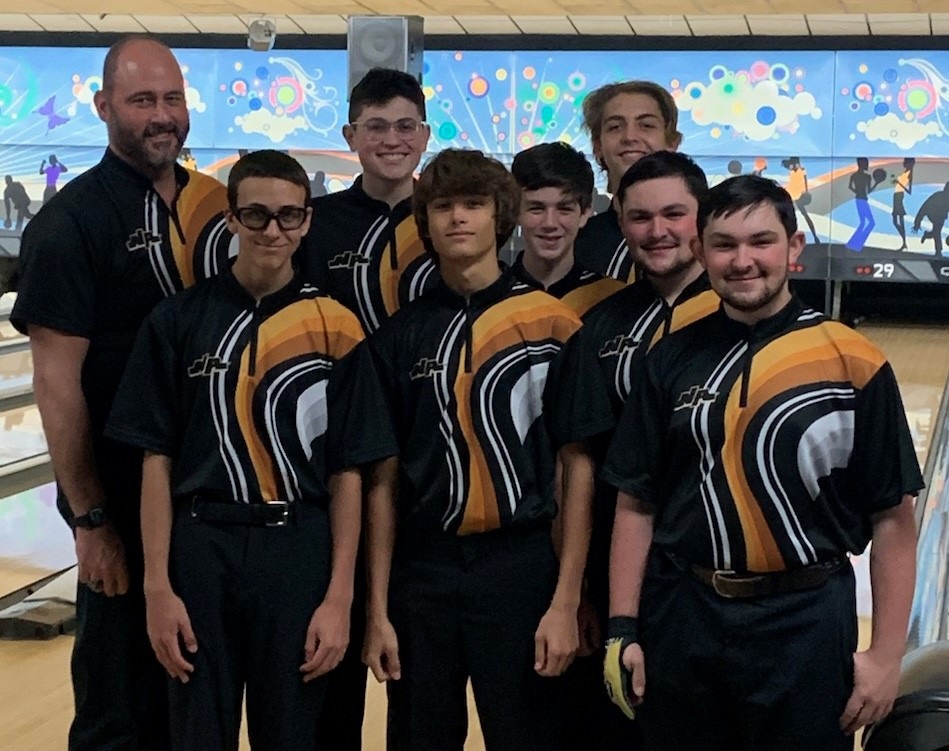 The North Allegheny Varsity Boys Bowling Team traveled to Eastern Pennsylvania this past weekend to take part in the 2021 Icebreaker Classic presented by STORM® Bowling and hosted by 222 Dutch Lanes and the Governor Mifflin Bowling Club.

The 26-team tournament pitted some of the best teams in Pennsylvania against each other in an early season competition.  Competitive bowling tournaments are bowled on a sport series oil pattern.  This time the bowlers had to take on a 40-foot pattern that was used for the 2020 Ohio High School State Championships.  Sport patterns are designed for professional or highly experienced bowlers, allow no room for error, and even the most experienced bowlers can have a hard time figuring out their technique and timing with these patterns.

The North Allegheny roster was limited to a seven-member team, with three of the members having never bowled competitively on a sport pattern.  From the onset, the Tigers found the oil pattern to be difficult to master, but they were up for the challenge. All seven members took part in game 1 and combined for 842 pins.  Game 1 was the lowest score the Tigers have bowled so far this year but was good enough for 12th place after one game.

The Tigers settled into Game 2 and were led by senior Gavin Rush’s 211.  Rush started the game with a turkey and then followed it up with 2 more doubles.  Sophomore Cole Scott substituted into the game in the 5th frame and proceeded to throw a Yahtzee, 5 strikes in a row.   The team finished with a 903 in Game 2 and moved into 11th place.

With time running out and their backs to the wall, the Tigers rallied In Game 3 with Rush (222), senior Jeb Jorden (211), and senior Marc Sostmann (205) all surpassing 200 pins.  The 5-member team from North Allegheny mustered up a 980 for their highest game of the day. This was the 4th highest Game 3 thrown out of all 26 teams, moving the Tigers into 7th place.  After round 1, NA was 59 pins below the cut and leading the Tigers was Rush with a 607 Series.

For round 2 of qualifications, the game changed from the traditional bowling game, into a best of three Baker game series.  Baker competitions are unique because they are always bowled as a team and every member must work together on the same bowling game. Typically found in Collegiate tournaments, the Baker format comprises of a team of bowlers who rotate bowling in each frame in a game. The leadoff person bowls frames one and six, the second person bowling frames two and seven, and so forth. In a Baker format, a higher emphasis is put on bowling as a team as each shot is crucial to the team’s success; emphasizing the idea of performing as a team by capitalizing upon each other’s strikes and spares for team count.

For the baker games NA used the line-up of Rush, sophomore Nate Redondo, Scott, M. Sostmann, and Jorden.  The team pulled together scores of 180, 200, 187.  These scores were the 6th best scores for the day.

In the end, the Tigers finished with 3292 pins. Unfortunately, the cut to make it into the final round of competition was 3302.  The Tigers competed well in their first tournament of the season and will build on this 7th place finish as they continue to make adjustments for this bowling season and possible post-season play.