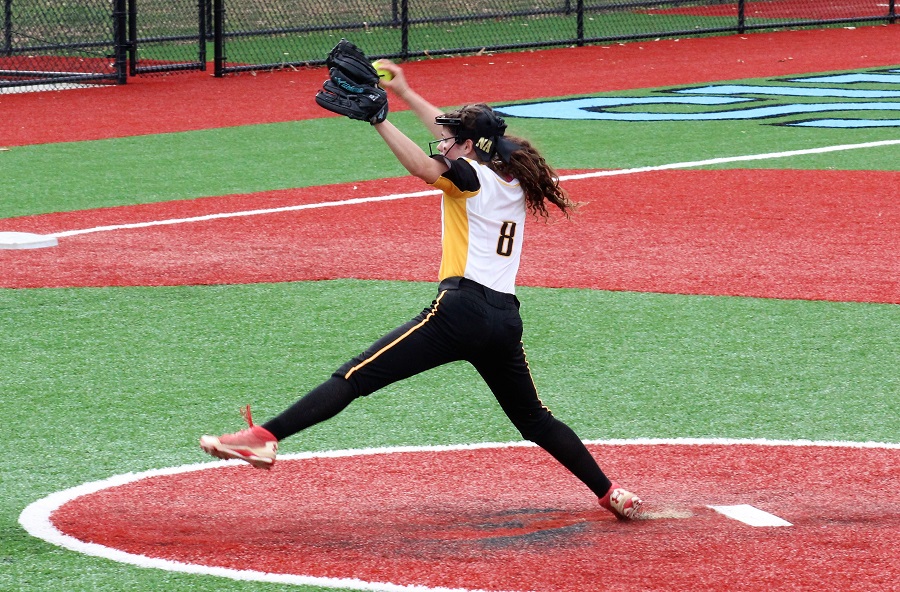 North Allegheny seized sole possession of first place in the Section 3-AAAAAA standings with a 5-1 win at Seneca Valley on Tuesday afternoon. Sophomore pitcher Brooke Serbin earned the victory with a complete game effort, picking apart a top-flight Seneca Valley lineup with pinpoint location. Serbin scattered five hits while striking out a batter, also adding an RBI single in the third inning to her stat line. For her efforts, Serbin was recognized as the Wright Automotive Player of the Game by the North Allegheny Sports Network.

Seneca Valley starter Claire Zimmerman matched Serbin pitch for pitch in the first two innings, quickly retiring the first six batters she faced. However, miscues by the Raiders helped the Tigers to a three-run third inning. With one out, senior Maddy DeRubbo walked and advanced to third on a bloop single to right by Bri McDonough. Shortly after, DeRubbo scored on a wild pitch to give NA a 1-0 lead. McDonough, who had already moved to second on the wild pitch, advanced to third base on an SV passed ball. Serbin followed with an RBI single to give the Tigers a 2-0 lead and made her way to third base on an SV throwing error. Junior Anna Pilotta drove home Serbin on a sacrifice fly to center to improve the NA advantage to 3-0.

Seneca Valley got a run back in the bottom of the third inning on a two-out RBI single by Elayna Nagy to trim the score to 3-1, Tigers. However, North Allegheny tacked on two more runs in the fifth inning to take a firm hold of the contest. Similar to the third inning, the Tigers capitalized on Seneca Valley mistakes, including two more wild pitches and an error. DeRubbo and McDonough both scored on wild pitches in the inning to bring the score to its eventual final, 5-1, North Allegheny.

The win was North Allegheny’s fourth in a row and sixth straight against Seneca Valley. The Tigers leap to 4-1 overall and 4-0 in Section 3. The Raiders slip to 6-3 overall and 3-1 in the section. North Allegheny hosts North Hills on Thursday at 7:00 p.m.