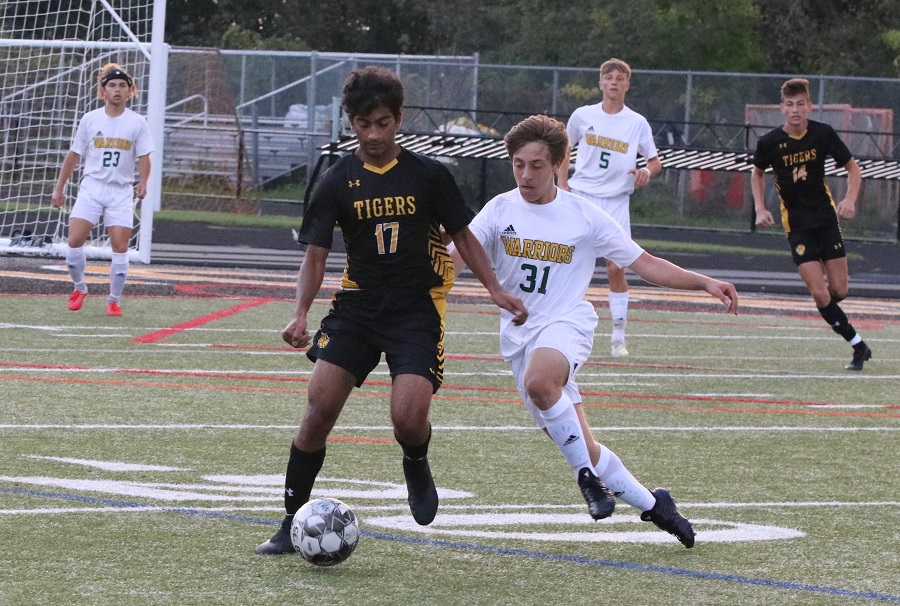 In the final home match of the regular season, the North Allegheny boys’ soccer team hosted the Shaler Titans with a chance to secure a playoff spot with a victory.  Goals came by the bunches, as the Tigers were completely dominant in an 11-2 win. The victory, coupled with an Allderdice loss earlier in the day, clinched a playoff spot for the Tigers for a 10th consecutive season.

Scoring opened for the Tigers four minutes into the match when senior midfielder Bryce Boroughs delivered a cross into the box that found senior forward Sam Maldia, who neatly finished the opportunity for a 1-0 lead.  Forty-six seconds later, senior midfielder Matt Van Kirk banged home a rebound off a Shaler defender adding the quick second goal.  The third came again from Van Kirk off a well-placed cross from senior midfielder Jack Walsh for a 3-0 advantage.   At 18:33 remaining, senior forward J.D. Runatz scored the first of his four goals on the evening, finishing a nice pass from senior forward Justin Mericle, putting the Tigers up 4-0.  Four minutes later, Runatz found the back of the net again after a sweet pass from junior midfielder, Kensley Owens.  Scoring ended in the first half, when Shaler was awarded, and finished, a penalty kick opportunity, placing the score at 5-1, Tigers, going into the locker room.

Runatz opened the half by scoring two goals within the first eight minutes, putting the Tigers up, 7-1.  Van Kirk added the eigth notch for the Tigers, closing off his scoring binge with a hat trick on the night.  Owens soon followed with two additional goals and senior midfielder Saif Ali delivered a point-blank laser with 12 minutes remaining to place an emphatic end to the scoring for the Tigers.  Shaler added a final mark with 6:02 remaining, giving the Tigers an 11-2 final victory.

The win raised the Tigers overall record to 9-6-1, 7-5-1 in the section.  The next game for NA is Thursday at Pine-Richland in the final section match of the season. The game will be broadcast live via the internet on the North Allegheny Sports Network.