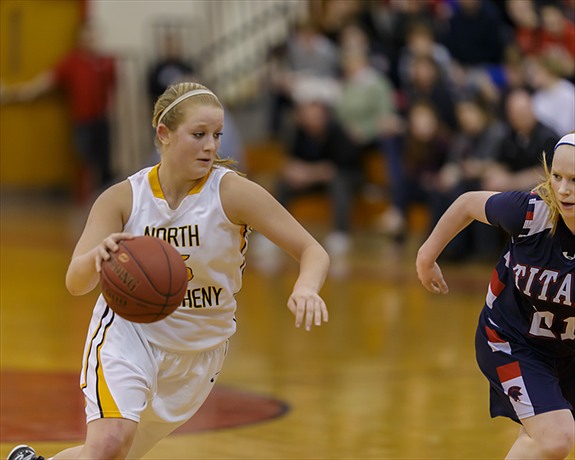 Considered a WPIAL title contender and preseason favorite to repeat as Section 3-AAAA champions, the North Allegheny girls’ basketball team raced out of the gates with a lopsided 67-3 win over the Kiski Area Cavaliers on Friday night at the Wright Automotive Tip-Off Tournament.

The Lady Tigers pounced on the Cavs for a 34-0 lead in the first quarter and held a 47-0 advantage by intermission. Junior forward Taylor Lake led the Tigers with 11 points on the night, all of which came in the opening stanza. Lake also pulled down four rebounds, three on the offensive glass, and was named the Wright Automotive Player of the Game.

Eleven different players scored for North Allegheny, including sisters, Meg and Piper Morningstar, who each finished with nine points. Piper Morningstar was 3 for 4 from beyond the arc.  Collectively, the Lady Tigers shot 60 percent from the field were 7 of 14 on three pointers.

Kiski, losers of 22 straight games dating back to 2013, didn’t get a shot off from the field until 3:30 was left in the first quarter.  The Cavs scored their only points of the night on a lay-up and free throw by senior Kyijah Peterson with nearly two minutes gone in the second half. The Cavaliers were just 1 of 19 from the field and committed 27 turnovers.

North Allegheny looks to build on the opening night win over Kiski with a meeting against the Penn Hills Indians in the tournament title game.  The contest gets underway at 3:00 pm and will be broadcast live via the internet on the North Allegheny Sports Network.