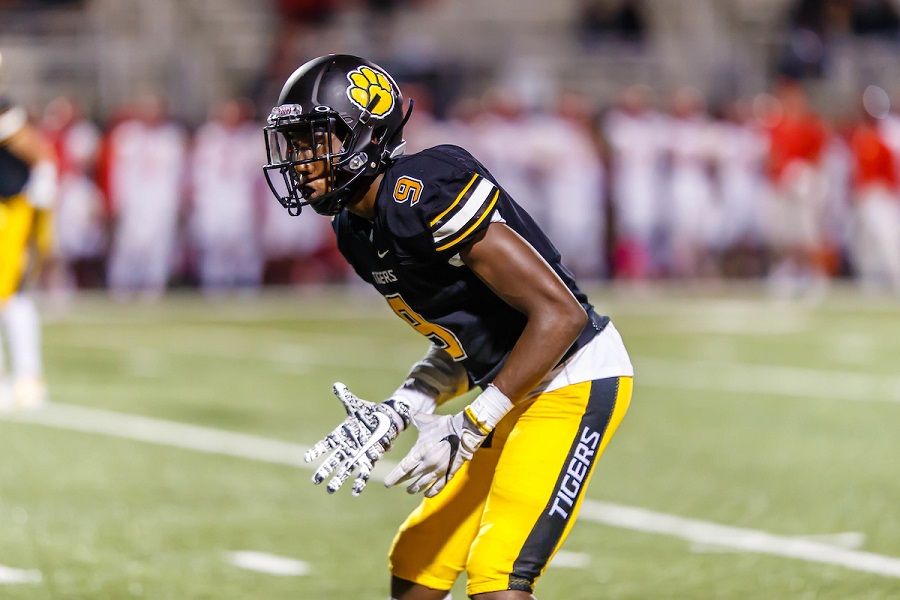 For the second consecutive week, the North Allegheny defense forced five turnovers and spearheaded a Tigers’ 49-14 victory at Seneca Valley on Friday night. The win was NA’s fifth in a row and secured a berth in the upcoming WPIAL playoffs. Junior defensive back Joey Porter Jr. reeled in three interceptions on his way to Wright Automotive Player of the Game honors.

Hosting senior night at NexTier Stadium, the homestanding Raiders were revved up to start the night and forced a three-and-out from the Tigers on their first possession. Seneca Valley’s ensuing possession was a seven-play, 61-yard march that culminated on a 14-yard touchdown pass by Gabe Lawson to Luke Smith for a quick 7-0 lead.

North Allegheny used its power-rushing game on the next drive and chewed up 80 yards on 11 plays for the game-tying score. Senior running back Turner White rushed for a 3-yard score with 4:15 remaining in the opening stanza to even things up at 7-7.

The Tigers defense began to take control of the game in the second quarter when Porter corralled his first interception of the night and returned the ball to the Seneca Valley 25-yard line. Eight plays later, John Vardzell scored on a 1-yard end around for a 13-7 lead with 11:07 left in the second quarter. The extra point kick was missed following the Vardzell touchdown.

Seneca Valley’s next possession lasted only one play when Lawson fumbled on a read-option carry and the ball was recovered by NA’s Alex Hays at the Raiders 29-yard line. The Tigers went for the jugular on the very next play and quarterback Luke Trueman rifled a 29-yard touchdown pass to Vardzell for a 19-7 lead. Trueman followed with a 2-point conversion pass to Porter to bring the score to 21-7, Tigers.

North Allegheny ballooned the lead to 28-7 with 4:17 left in the second quarter when Trueman scrambled for a 14-yard touchdown run. Trueman finished the night with 136 yards rushing and three total touchdowns.

Just before halftime, Seneca Valley converted on a 4th and 3 from the NA 14-yard line for a 14-yard touchdown pass from Lawson to Noah Mancuso to trim the Tigers lead to 28-14 by intermission.

Hoping to build on their late-second quarter success, the Raiders started the third quarter with the football. However, a wide receiver screen pass to Josh McLean was juggled away and intercepted by NA safety Nikko Rankin and returned 32-yards for a touchdown. The Tigers led 35-14 with 11:42 on the third quarter clock.

Following the Rankin interception, the rout was on and North Allegheny invoked the mercy rule before the end of the third quarter courtesy of a 70-yard touchdown run by Trueman and a 10-yard scoring tote by White for a 49-14 lead. White finished with 79 yards on 16 carries and two touchdowns.

With the victory, North Allegheny improves to 6-2 on the season and 4-1 in the Northern Seven Conference. Seneca Valley slips to 1-6 overall and 1-4 in conference play. The Tigers host Hempfield next week in non-conference play.