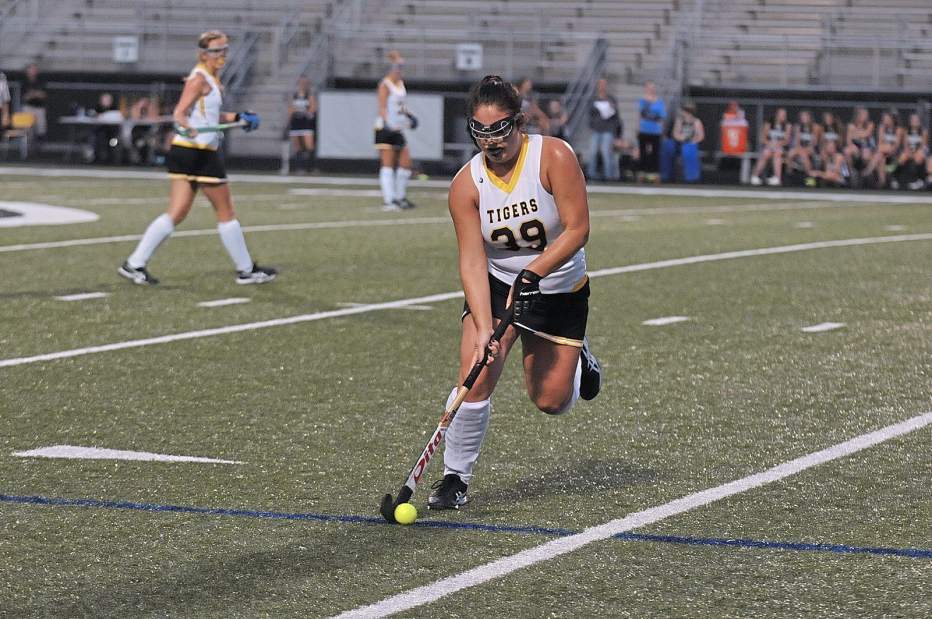 Junior Sloan Rost scored the game-winning goal in overtime to lift the Fox Chapel Foxes to a 1-0 win over the North Allegheny Tigers on Thursday evening.

The game was a homecoming of sorts for the Fox Chapel coaching staff. Head coach Michelle Couch, in her first year at Fox Chapel, served as an assistant coach at North Allegheny last season. Fox Chapel first-year assistant Emily Humiston played for the Tigers from 2009-2012 and is the program’s all-time leader in goals (61) and points (147).

The Tigers were hoping to be unwelcome hosts, however, and looked to take the early lead with four penalty corner opportunities in the first half. NA’s best scoring chance came on a penalty corner with 17:30 on the clock when senior Sam Marien uncorked a strong shot that hit the right post but ricocheted away, keeping the game scoreless.

In a back-and-forth first half in terms of field position, Fox Chapel had a good scoring chance with 7:20 remaining as junior Ellie Markel put a shot on net but was denied on a fine save by NA goalie Ella Backauskas.

Senior goalie Kali Kugler got the call in the second half for the Tigers and was immediately tested with 27:30 to play on a shot by senior Rebecca Klaas. Kugler made the stop on Klaas to keep the scoreless tie intact.

Along with Kugler and Backauskas in net, the Tigers defense was outstanding in protecting the circle. Seniors Trystan Laughrey and Kayley Cooper, and juniors Ally Barcaskey and Maya DeNoma played well on defense, among others.

Providing a constant spark on offense was senior Bridget Russell who nearly gave North Allegheny the lead with a shot with 4:30 left in the game, but Fox Chapel goalie Marissa Hardiman made a terrific kick save. Russell’s efforts led to numerous penalty corners, a category the Tigers led in by a 12-7 margin. For her play, Russell was named the Wright Automotive Player of the Game.

While Fox Chapel trailed in penalty corners on the day, it managed to score the game-winning goal courtesy of a corner in overtime. Markel put a shot on net that deflected into the air and was batted into the goal by Rost, the Foxes leading scorer from a year ago, to give Fox Chapel a 1-0 victory.

Following Thursday’s outcome, North Allegheny slips to 6-5 overall and 2-2 in WPIAL Division I. Fox Chapel improves to 3-1 in the division. The Lady Tigers will face Hathaway Brown on Saturday in a non-section road contest at 11:00 a.m.