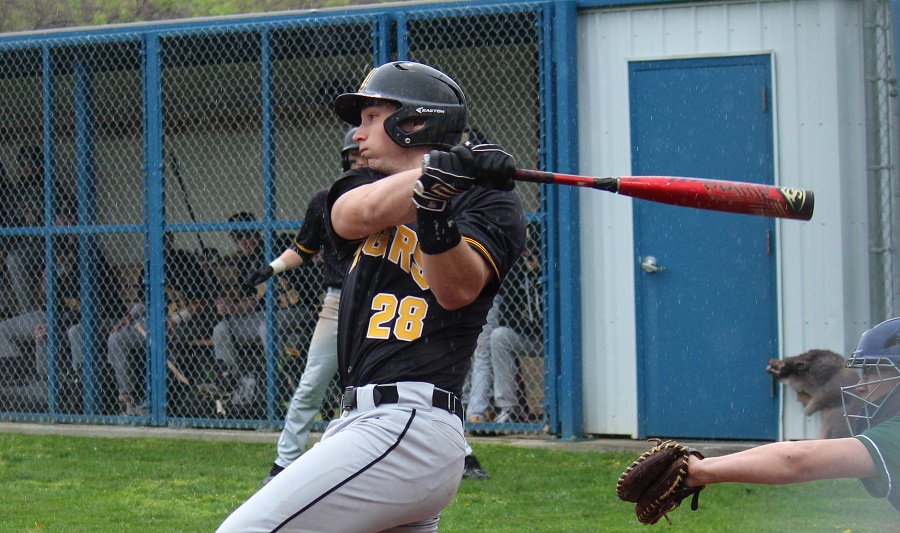 In a battle between the top two-ranked teams in Class 6A, the North Allegheny Tigers were edged by the Norwin Knights on Friday afternoon, 7-6. Senior Ryan Scavnicky’s RBI single in the bottom of the seventh scored Elijah Dunn to give the host Knights a walk-off win, Norwin’s sixth in a row. For the Tigers, the narrow non-section defeat snapped NA’s eight-game winning streak.

With Class 6A bragging rights at stake at the midway point in the season, junior Cole Young gave North Allegheny an early 1-0 lead when he stroked a solo home run to right field, his fourth of the season, in the top of the first inning. Norwin tied the game at 1-1 in the bottom of the second when John Whalen drew a bases loaded walk to score Justin Turcovski.

In a seesaw affair, North Allegheny grabbed a 4-1 lead in the top of the third thanks to an RBI single by Danny Gallon and a two-run double courtesy of Spencer Barnett. However, Norwin answered back with a three-run bottom of the fourth and a solo home run by Eric Chorba in the bottom of the fifth to take a 5-4 lead. Landon DeBeradin added an RBI single in the fifth to increase the Norwin advantage to 6-4.

Undaunted, North Allegheny staged a rally in the top of the seventh. Down to their final out with nobody on base, Gallon sparked a comeback with a double and Joe Manesiotis reached base on a hit by pitch, who was replaced by pinch runner Harron Lee. Both Gallon and Lee scored on a clutch two-run double by Aaron Posey and the game was tied, 6-6. Despite NA’s rally, Scavnicky’s heroics in the bottom of the seventh helped Norwin prevail, 7-6.

On the mound for Norwin, Turcovski picked up the win despite blowing the save in the top of the seventh, allowing two runs and striking out a pair. Barnett took the loss for North Allegheny, permitting one run in 1.2 innings of relief.

North Allegheny dips to 10-2 overall with the non-section loss, while Norwin improves to 9-1 on the season. The Tigers will host Butler on Monday night at 7:00 p.m. in a Section 1-6A contest. The game will be broadcast live via the internet on the North Allegheny Sports Network.