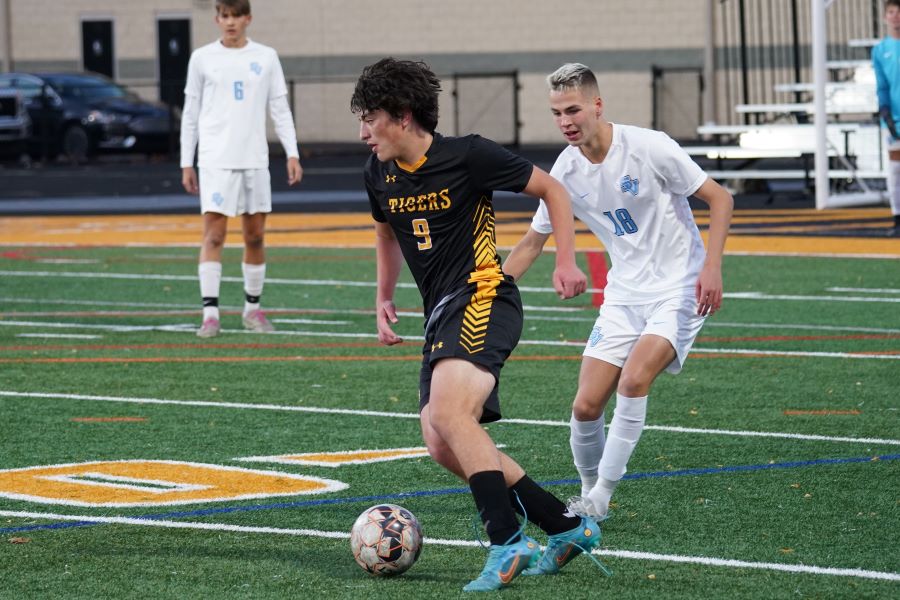 North Allegheny’s playoff fate was decided over the weekend, so the Tigers came into their final section match against rival Seneca Valley playing for pride. A spirited effort against the two-time defending WPIAL champions was spoiled when the Raiders scored two late goals to defeat North Allegheny 2-1.

Despite pushes from the Raiders early and late in the first half, North Allegheny took a 1-0 lead in the 18th minute on a great individual play by Patrick Lopresti.

The senior striker finished a fantastic dribbling effort with a spin and a shot that eluded Ryan Krumenacker to give the Tigers the lead.

That one goal margin lasted until the 63rd minute when Seneca Valley tied the score.Gavin Loya, who recently re-entered the match, took a feed from Will Bruno and tapped home the game tying goal with a sliding effort.

The game winning goal came of the foot of Cole Kamarec, as he found the net from distance in the 77th minute to give the Raiders a 2-1 lead.

With the only goal on the evening for the Tigers, Patrick Lopresti was named the Wright Automotive Player of the Game. The goal was the 3rd of the season for the senior striker.

With section play finished, the Tigers end the 2022 slate with a non-section matchup on the road Wednesday against the Norwin Knights.