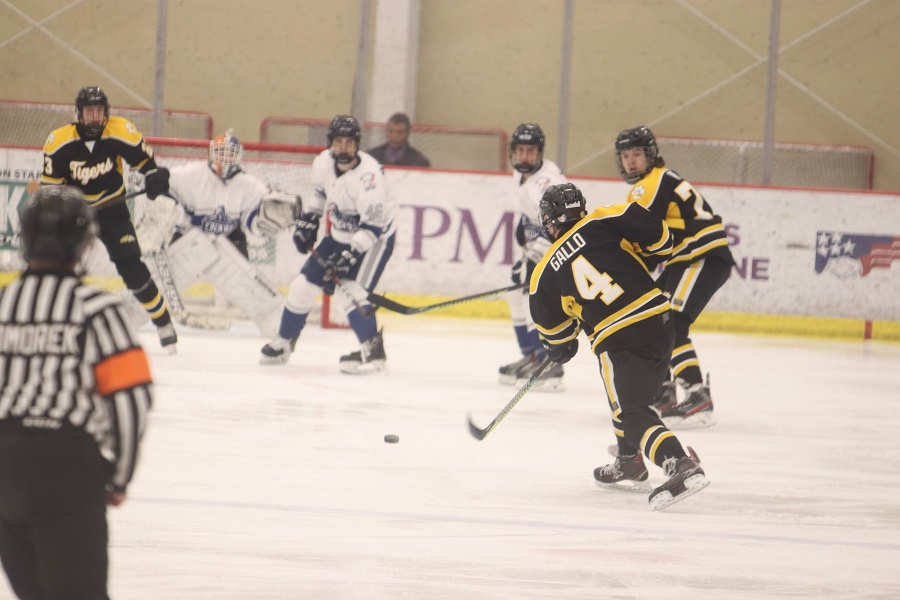 The North Allegheny ice hockey team dropped a 4-2 decision to Malvern Prep in the Class AAA Pennsylvania Cup Championship on Saturday at the UPMC Lemieux Sports Complex in Cranberry.

Making their fourth appearance in the state championship game, the Tigers were seeking their third state crown and got off to a great start in the first five minutes of the contest. At the 3:17 mark of the opening stanza, Trey Gallo sent a shot on net that was not controlled by Malvern Prep keeper Anthony Perti. Sophomore Nate Spak quickly pounced on the rebound for his second goal of the playoffs and NA led, 1-0.

The Tigers had a chance to expand the lead just minutes later when Malvern Prep’s Travis Buckley was charged with a cross checking penalty. However, Quinn Dougherty changed the momentum of the game with a short-handed goal at the 7:09 mark of the period and the game was tied at 1-1. Only 26 seconds later, the Friars struck again as senior Jack Costabile scored for a 2-1 lead. Costabile added another tally at the 9:38 mark of the first for a 3-1 Malvern Prep lead.

The Friars had the benefit of a power play to start the second period and quickly cashed in 20 seconds into the period on a goal by Jimmy Kirk and the MP lead swelled to 4-1. Shortly after the Kirk goal, the Tigers were the recipients of a power play and junior sniper Connor Chi hit top shelf at the 2:40 mark of the second with a wrist shot and NA cut the deficit to 4-2. The goal was Chi’s fourth of the playoffs.

While the Chi goal gave NA a shot in the arm, the Tigers were unable to get any closer in the and ultimately fell 4-2 to the Friars, who won their third Pennsylvania Cup title and first since 2004. Perti earned the win in net with 21 saves. Senior Josh Bailey made 21 saves in net for the Tigers.

Finishing the season with a 16-6-2 record and winning a fourth Penguins Cup title this season, 2021 will go down as a memorable one for the North Allegheny ice hockey team. Congratulations to head coach Mike Bagnato and the entire team for another successful season.