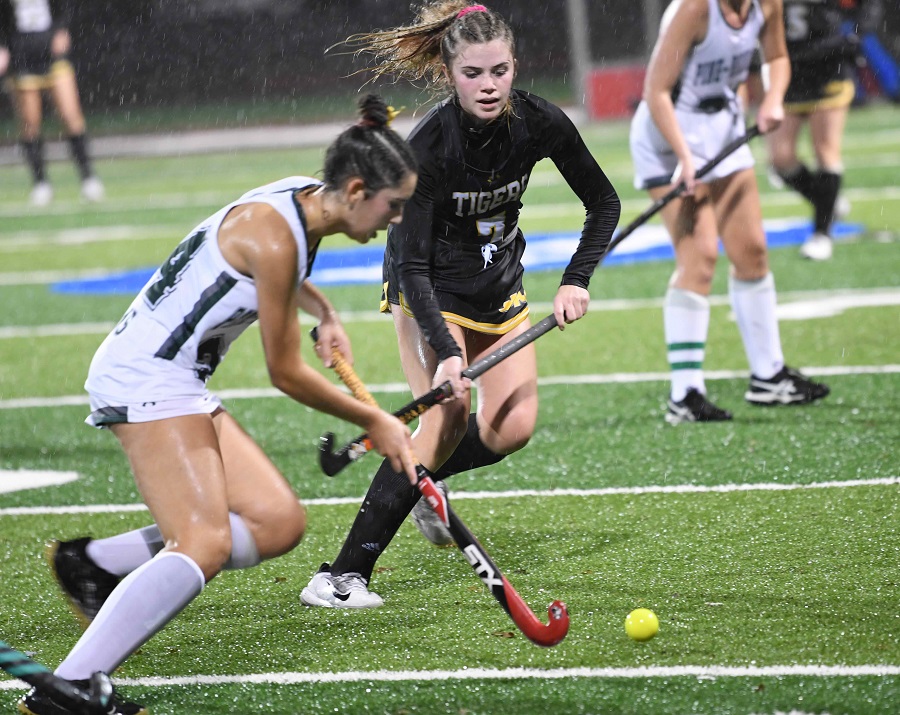 North Allegheny stormed out of the gates in the opening period and nearly scored the first goal of the night one minute into the game. Junior Sofia Mianzo charged into the circle from the right sideline and sent a hard pass across the circle to sophomore Tanvi Challa, who let loose a cannon shot that struck the left post and bounced away. The near-miss by the Tigers kept the game scoreless.

With 9:47 remaining in the first quarter, Pine-Richland converted on a penalty corner on a give-and-go pass by senior Fiona Kortyna to fellow senior Rylie Wollerton, who scored the first marker of the night for a 1-0 Rams lead.

After a scoreless second quarter, the Rams added onto the lead with 13:40 to play in the third period on a strong reverse chip by Wollerton for a 2-0 advantage.

North Allegheny pressured shortly after and nearly came up with a goal with 6:40 left in the period when the ball squirted behind PR goalie Sadie Baratka in the circle. Before junior Mila Prusak could tip the ball into the net, senior defender Claire O’Conner raced to the loose ball and cleared it out of the danger to keep Pine-Richland’s two-goal lead intact.

The Tigers were able to cash in for a goal on a penalty corner with 6:03 left to play courtesy of junior Lauren Kampi, who netted her 14th marker of the season, trimming the score to 2-1, Rams.

Despite NA’s best efforts in the remaining minutes, Pine-Richland put the game away with 17 seconds remaining on high-stick goal by freshman Georgia Rottinghaus on a penalty corner to bring the final score to 3-1.

For their efforts and outstanding contributions to the team throughout their careers, seniors Concetta Bochicchio and Erin Karapandi were selected as the Wright Automotive Players of the Game.

North Allegheny concludes the year with a 12-8 record, reaching the WPIAL championship game for the first time since 2017. Congratulations to head coach Michelle Couch and the entire Tigers team for a tremendous and memorable season.

Pine-Richland remains unbeaten with a 17-0 record and continues into the PIAA tournament.