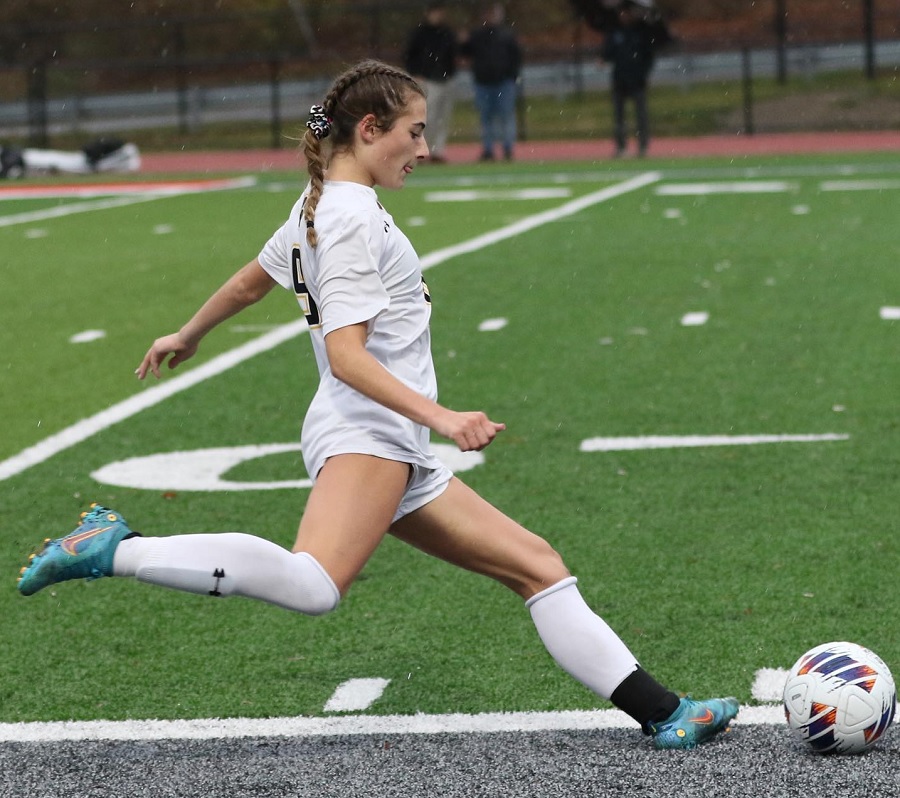 The North Allegheny girls’ soccer team fell to the Central Dauphin Rams, 2-1, in the PIAA Quarterfinals on Saturday at Westmont Hilltop High School.

NA started fast out of the gate and controlled the pace in the opening minutes. A combination of offensive zone time and stiff backline play gave the Tigers most of the possession time in the half. Central Dauphin took advantage of a North Allegheny corner kick, as a Ram fed a lead pass up field to sophomore Kayden Williams who was left alone in a one-on-one matchup with junior goalkeeper Natalie Rak. Williams slipped a shot into the NA net from 10-yards out with 22 minutes left in the half for a 1-0 lead. 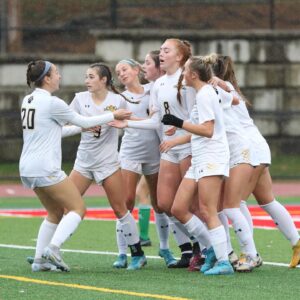 NA celebrates Maddie Miller’s game-tying goal in the first half.

NA struck back 12 minutes later, as senior Sophia Palermo drove a corner kick into traffic in front of the Rams net. The ball deflected off sophomore defender Maddie Miller for her first of the season. Miller became the 19th different Tiger to score at least one goal this season. The game was tied 1-1 at the half.

The Tigers once again came on strong to start second half play, but the Rams took full advantage of another corner kick with 27 minutes left in the contest. Senior midfielder Nia Chinapoo aired a shot from the far flag into traffic in front of the NA net. Junior Makenna Kirk deflected what turned out to be the game-winner into the back of the net.

North Allegheny had opportunities for an equalizer in the closing minutes. Sophomore Aubrey Wells clanked a shot off the crossbar with 22 minutes to go. Senior Riley Cerqua also rattled a shot from distance off the same bar with less than two minutes to go.

The Wright Automotive Player of the Game was awarded to all the seniors including Anna Bundy, Allie Burns, Riley Cerqua, Sophia Palermo and Lucia Wells.

The Tigers end another great season with a 21-2-0 overall record (13-1-0 in section play) and another WPIAL Championship.  Congrats to Head Coach Chuck Kelley and the team on the success, and good luck to the seniors with your future endeavors on and off the pitch.