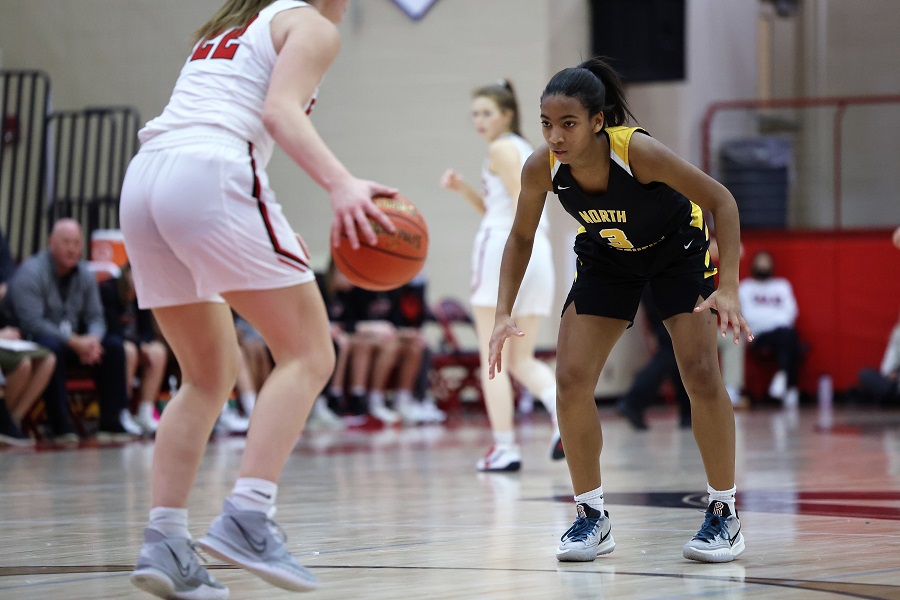 NA Falls To Cumberland Valley In Double OT In PIAA First Round, 63-60

In a rematch of last year’s PIAA semifinal, the North Allegheny girls’ basketball team fell to Cumberland Valley on Tuesday night in the PIAA Class 6A first round, 63-60, in double overtime. The Tigers trailed by as much as 10 points in the second half but put together a furious fourth quarter rally to force overtime in a valiant comeback bid. Cumberland Valley sophomore Jill Jekot hit the game-winning 3-pointer with 2.6 seconds remaining in the second overtime to propel the Eagles to victory.

Cumberland Valley, who never trailed in the game, opened the with a quick 5-0 lead and held a 19-10 advantage early in the second quarter. North Allegheny went on a 12-4 run to cut the deficit to 23-22 late in the period before Cumberland Valley ended the half on a 7-0 run to take a 30-22 lead into the locker room at the half.

CV senior and Gettysburg College commit, Dejah Hill, who finished with 12 points, hit a pair of free throws to open the third quarter to give the Eagles their largest lead, 32-22.

Spurred on by Pitt commit Jasmine Timmerson, North Allegheny rallied and cut the score to 36-34, CV, early in the fourth quarter. Timmerson totaled a team-high 18 points for the Tigers.

A trend that was maintained throughout night, each time the Tigers made things close or tied the game, the Eagles responded with an answer from Jekot. A Division I recruit, Jekot netted a game-high 31 points with six 3-pointers, and knocked down a trey with 5:44 left in the fourth quarter to grow the CV lead to 44-36.

Undaunted, Timmerson made a jumper with 3:15 left to cut the score to 44-38. A scoring drought for both teams left NA in a position to foul with under two minutes to play. However, a Lydia Betz steal, layup and free throw with 1:32 left changed the momentum of the game. The tide-turning play by Betz cut the score to 44-41, Cumberland Valley. Betz finished with 15 points and had a strong night on the offensive glass.

In the time remaining, the Eagles and Tigers exchanged free throws for 3-pointers and NA ultimately tied the game on three consecutive treys by senior Taylor Rawls, drawing even at 50-50 with 16.7 seconds left in regulation. Rawls finished with 14 points and was named the Wright Automotive Player of the Game for her heroic efforts down the stretch.

Cumberland Valley had a chance to win at the end of regulation and North Allegheny had the same at the end of the first overtime but neither could convert for the win. In the second overtime, Betz continued to make big plays for North Allegheny and tied the game at 60-60 with 19 seconds remaining.

That set the stage for Jekot’s game-winning 3-pointer with 2.6 seconds on the clock. The Tigers had one last desperation heave attempt but Timmerson’s half-court try was blocked by Sienna Manns, lifting Cumberland Valley to a 63-60 double overtime win and ending North Allegheny’s PIAA title defense.

The outcome ends North Allegheny’s season with a 21-4 overall record, while Cumberland Valley advances to the PIAA second round with a 21-5 record. Congratulations to head coach Spencer Stefko and the entire North Allegheny girls’ basketball team and coaching staff for another memorable season.