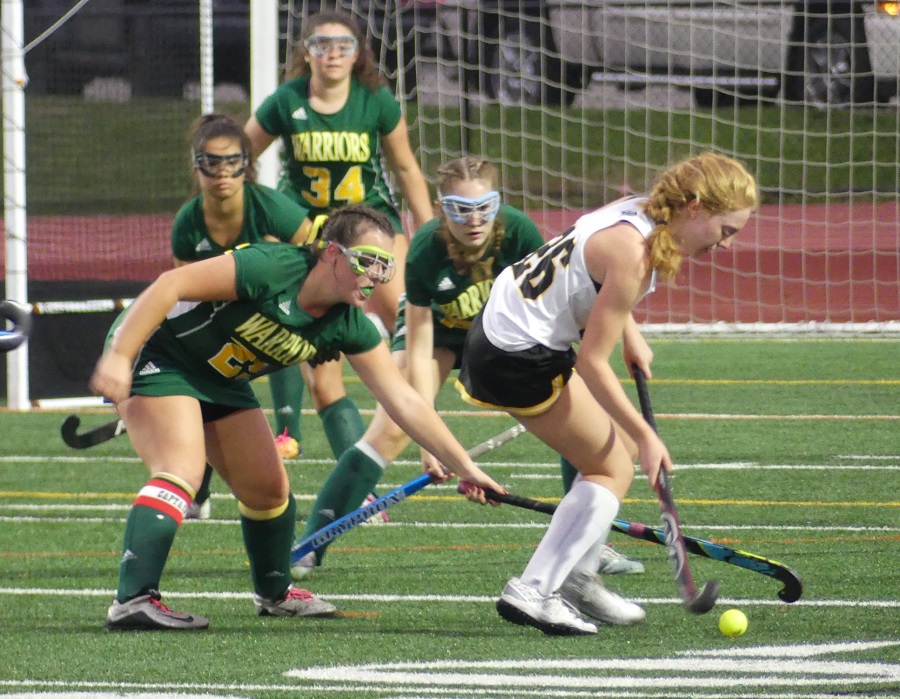 The North Allegheny field hockey team played in a tough non-section contest against Penn-Trafford on Thursday night and fell, 2-0, at North Allegheny Intermediate High School. For the Warriors, the outcome snapped a 14-game losing streak to the Tigers and was their first win against NA since 2011.

In the first half, Penn-Trafford dictated the pace of play and maintained possession with an aggressive approach. Taking of advantage of their time in NA territory, the Warriors cashed for the game’s first goal on a marker by Julia Moorhead with 7:37 to go in the first quarter.

Despite the constant pressure in the first 30 minutes, Penn-Trafford couldn’t add on to their lead thanks to the play of the NA defense and goalkeeper Jordan Ashbaugh. Ashbaugh made four saves, along with defensive stops from Sophia Caruso and Supritha Challa.

In the second half, North Allegheny changed the on-field momentum and applied pressure on Penn-Trafford. The Tigers two best scoring chances came in the first three minutes of the fourth quarter. Senior forward Ashley Loftis nearly scored the equalizer 2:30 into the period but missed wide right on a shot within the circle. Moments later, senior Marisa Hess narrowly missed to the right on a scoring chance. For her efforts in a hard-fought contest, Hess was named the Wright Automotive Player of the Game.

Clinging to a one-goal lead, Penn-Trafford took control of the game with 8:18 to play when senior Allyson Doran sprung loose from the midfield and sent a hard pass toward the net that senior Hannah Ondulich deflected in for a 2-0 Warriors advantage, and ultimately, a two-goal victory.

North Allegheny falls to 1-2 overall on the season following the non-section loss. Penn-Trafford remains unbeaten with a 3-0 record. The Tigers return to section play on Saturday with a 5:00 p.m. date with the Mt. Lebanon Blue Devils.