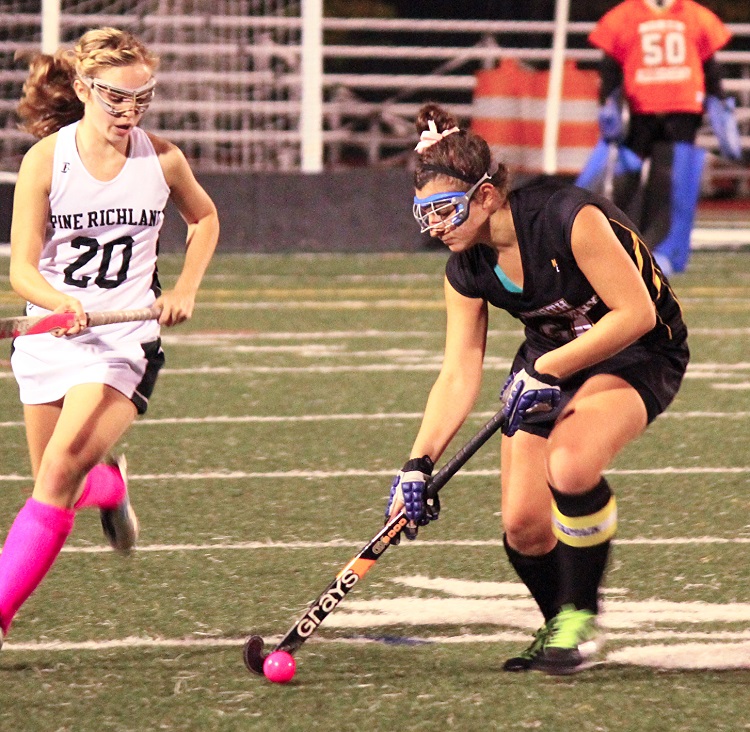 The NA field hockey team played to a 1-1 tie at Pine Richland on Tuesday evening in the final, regular-season game that would become the section-deciding match.  Because the Tigers had beaten the Rams earlier in the season, the tie placed the Tigers in sole possession of the AAA Section 1 title.  The contest was off to a very fast start, with considerable passing and long plays that went end to end.  Both teams were able to make several scoring attempts throughout the first half, with each taking three shots on goal.  NA was awarded four penalty corners to Pine Richland’s three, but it would be the Rams who found themselves with the upper hand with 7:34 remaining in the half, fueled by a boisterous student cheering section.  The goal was tallied by Rams junior, Sage Dowiak following a penalty corner and a scramble in front of the NA net.  Several shots were taken before Dowiak was able to find space and push the ball past the NA defense.  The Rams had been kept out of the Tigers’ end through much of the period due to the strong play of midfielder Megan Guzzardi and defenders, junior Kendra Downey and senior Liza Pucciarelli.  Senior goaltender Morgan Mendenhall tallied two saves against Pine Richland’s aggressive forward line.  Although NA was awarded three consecutive penalty corners with about four minutes left, the Tigers were unable to take advantage and the half ended with the Rams up 1-0.

The Tigers trailed for 28 minutes into the second half, when they were again awarded three successive penalty corners.  This time, however, the Tigers would capitalize on the chance.  On the third corner, junior midfielder Hannah Downing received the insert from junior Kailey Vogl at the left side of the shooting circle.  Downing took a quick shot which was partially blocked by a Pine Richland defender, leaving the ball resting inside the circle.  Downing raced forward, beating a second Pine defender to the ball and taking another wicked shot that blasted it’s way through the remaining defense and into the back of the net. Downing’s game saver boosted NA into a tie with Pine Richland at one apiece.  The half would end with the Tigers registering 7 shots on goal, while Pine Richland failed to tally a single shot. But the Rams goaltender made six saves to keep the Tigers at bay.  The game ended in a 1-1 tie in regulation, sending it into overtime.  The single 15-minute overtime period played out in a 7 v 7 format, which added space on the field, allowing for more wide-open play and longer passes.  It would be the Tigers that showed the most promise throughout the OT period, with several chances to take the lead.  Downey and senior Veronica Iriart maintained a stronghold on the Tiger defensive zone, forcing the period to end without any additional scoring, resulting in a final score of 1-1.

The Tigers enter the WPIAL Semi-Finals undefeated in Section 1, with a section record of 9-0-1.  The WPIAL playoffs get underway next week with the Tigers owning a home game at Newman Stadium.