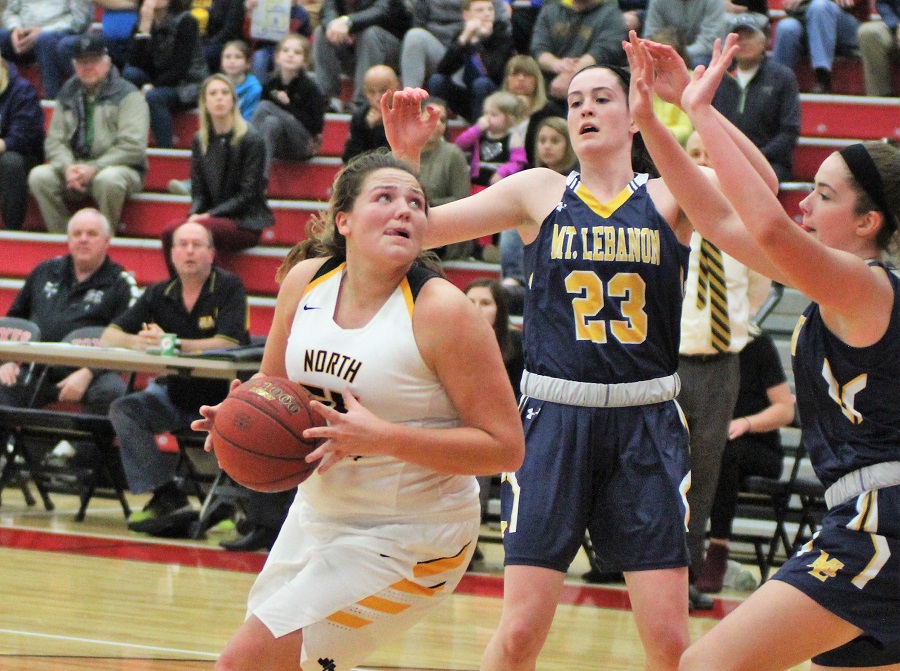 North Allegheny punched its ticket to the WPIAL championship game for a third straight season with a 34-20 victory over the fifth-seeded Mt. Lebanon Blue Devils on Tuesday night. It was the second consecutive year that the Tigers and Blue Devils met in the WPIAL semifinals. NA topped Mt. Lebanon last season in the semifinals, 61-44.

In the first quarter, Mt. Lebanon used a methodical four-corner offense to spread out the NA defense. The strategy was effective in the early going as the Blue Devils held a 9-3 advantage after one quarter of play. Mt. Lebanon took good care of the basketball with only one turnover and limited the Tigers to 1 of 8 shooting in the opening stanza.

In the second quarter, however, the North Allegheny defense rattled the young Blue Devils into eight turnovers which turned into points for the reigning WPIAL champions. The Tigers outscored Mt. Lebanon 13-2 in the second period and held a 16-11 lead at intermission. Senior Piper Morningstar scored seven points in the first half to help spearhead the NA effort. Morningstar finished the night with a game-high 12 points and three steals.

In the second half, Mt. Lebanon tried to employ the same deliberate offense but with the Blue Devils trailing, it did not have the same effectiveness. North Allegheny inched the lead to 22-14 after three quarters and put the Blue Devils away by outscoring them 12-6 in the final eight minutes for a 34-20 triumph. The Tigers defense limited Mt. Lebanon to 25-percent shooting from the field. The Blue Devils were led by junior Jamey Napoleon’s seven points.

While it was an erratic night for the NA shooters, just 4 of 25 from beyond the arc, senior Madelyn Fischer was a steady presence on the inside and posted eight points on 4 of 5 shooting and reeled in seven rebounds. For her efforts, Fischer was named the Wright Automotive Player of the Game.  Junior Rachel Martindale chipped in with eight points and eight rebounds.

North Allegheny remains undefeated with a 24-0 overall record and advances to face the second-seeded Peters Township Indians on Saturday night at the Petersen Events Center at 7 p.m. The game will be broadcast live via the internet on the North Allegheny Sports Network.  Mt. Lebanon slips to 13-12 overall and will continue their season on Friday, March 9 in the first round of the PIAA playoffs at a site and time to be determined.