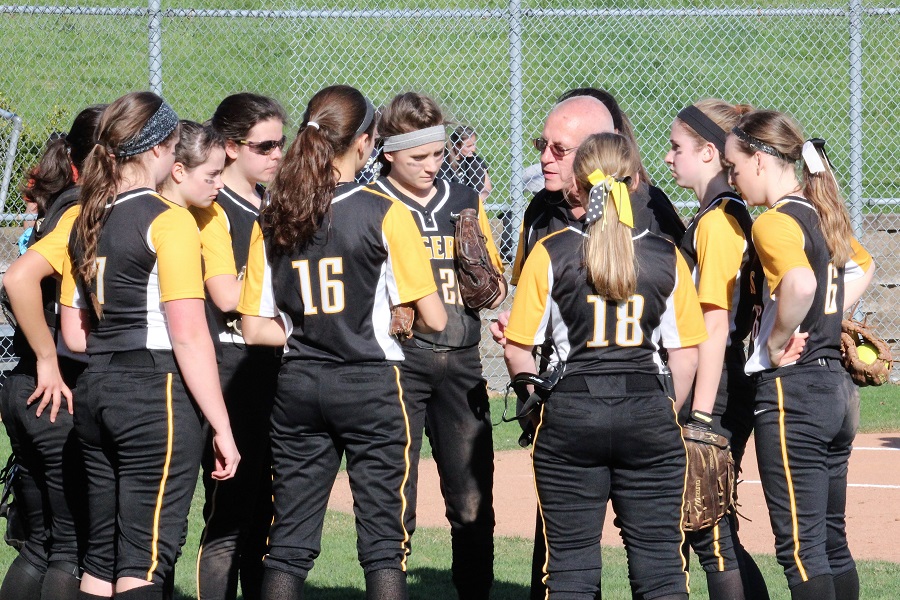 Facing off against an imposing Pine-Richland lineup that was averaging over 11 runs per game in its first three contests, it was North Allegheny who outslugged the visiting Rams for an 11-6 victory. The Tigers built a 9-1 lead through three innings and used a 15-hit attack to claim the section win. The victory was North Allegheny’s 13th in a row against Pine-Richland.

In the first inning, pitcher Brooke Serbin set down the Rams with a 1-2-3 inning and the NA lineup gave its starting hurler immediate run support in the bottom half. With one out, Anna Pilotta singled and Rachel Martindale doubled to put runners at second and third. Sophomore Kristen Chomos drove home Pilotta with a sacrifice fly for a 1-0 lead. Sophia Dollard followed with an RBI single to score Martindale and the Tigers led, 2-0.

Pine-Richland answered quickly in the top of the second inning with an RBI double by Emma Keilly to cut the NA advantage to 2-1. The bottom of the second proved to be the most pivotal frame as the Tigers shelled Rams starter Morgan Hall for six runs. After one out, the Tigers strung together four consecutive singles, including RBI base hits by Bri McDonough and Serbin for a 4-1 lead. Pilotta stroked a two-run triple to left center field for a 6-1 advantage and Martindale delivered a two-run blast to leftfield for an 8-1 lead. The Tigers’ lead swelled to 9-1 in the third inning courtesy of another RBI single by McDonough.

The Rams started to edge back into the contest in the middle innings with an unearned run in the fourth and a three-run fifth. Anna Slebonik, Brie Horrell and Keilly posted three consecutive RBI singles in the fifth inning to trim the NA lead to 9-5.

The Tigers effectively put the game out of reach with two insurance runs in the sixth inning. Serbin trotted home on a wild pitch and Shannon Hamm’s RBI single, her third hit of the game, improved the NA lead to 11-5. Pine-Richland refused to go away quietly in the seventh inning but managed only one run with a bases loaded walk by Katie Horrell to bring the score to its ultimate final, 11-6, Tigers.

In the pitcher’s circle, Serbin pitched 4.1 innings and struck out two batters to earn the victory. Dollard slowed down the Rams comeback efforts in the middle innings with 2.1 effective innings, permitting only one run. Freshman Audra Sapp pitched to one batter in the seventh and recorded a strikeout.  Pine-Richland’s Morgan Hall tossed a complete game but suffered the loss.

With the win, North Allegheny improves to 2-1 overall and 2-0 in Section 3-AAAAAA. Pine-Richland slips to 3-1 overall and 1-1 in section play. The Tigers are scheduled to visit Butler on Friday afternoon, weather permitting.