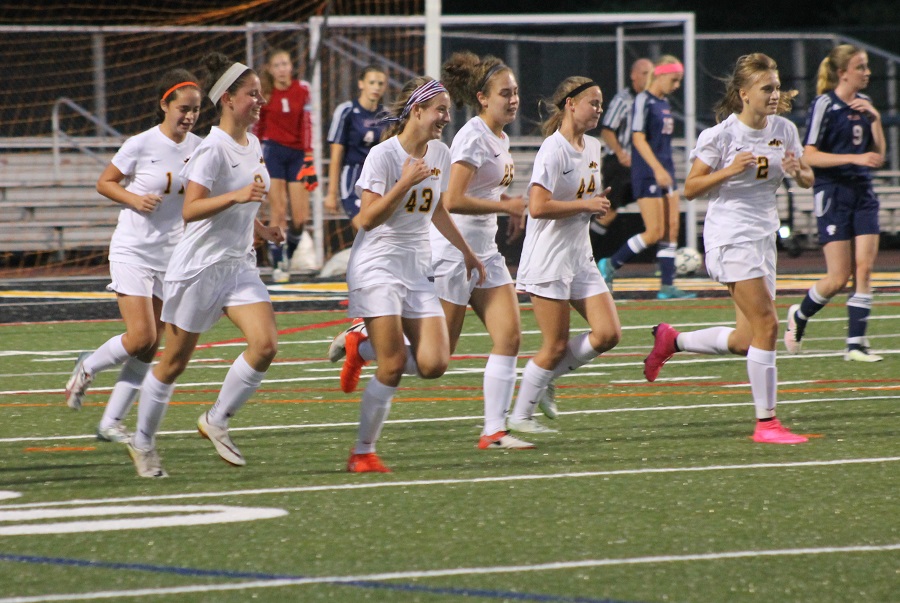 NA Plays To 1-1 Stalemate With Butler

The North Allegheny girls’ soccer team played to a 1-1 tie with the Butler Golden Tornado on Monday night at Newman Stadium. The tie for the visiting Golden Tornado secured their first playoff berth in 13 years. For North Allegheny, hope for a playoff spot remains heading into Wednesday night’s section finale with the rival North Hills Indians.

In the early going, Butler used its team speed to garner a couple of good scoring chances by junior Brittnie Spithaler in the first five minutes of the game. However, a left-footed kick by Spithaler missed wide right and a header attempt missed the NA net as well to keep the game scoreless. Following Butler’s initial surge, North Allegheny set the pace for the better part of the first half and generated good offensive pressure courtesy of freshman Ava Ruppersberger, junior Morgan Anderson, sophomore Alex Adams and freshman Isabella Pietropola. Despite that pressure the Tigers were unable to find the back of the net as the game remained deadlocked going into halftime.

In the second half, NA’s continued presence in the Butler zone finally paid off when freshman Emma Bundy scored with 10:56 remaining to give the Tigers a 1-0 lead. While the scoring chances weren’t many for Butler, the Golden Tornado capitalized with 2:31 to play in regulation for a goal by junior Alyssa Lapusnak to even the score at 1-1. The goal by Lapusnak forced overtime between the two teams for the second time this season.

In the extra session, Butler’s team speed nearly ended the game when Alexis Leech sprung free for a point blank shot on the NA net but senior goalie Cara Schwartz made a terrific diving save to keep the game tied. Schwartz made six saves to help force a 1-1 stalemate with the Golden Tornado. For her efforts, Schwartz was named the Wright Automotive Player of the Game by the North Allegheny Sports Network.

North Allegheny sits at 6-7-1 overall and 3-5-1 in Section 1-AAAA following the tie. Butler clinches a playoff berth with a 5-3-1 section mark and 9-4-1 overall record. North Allegheny is in fifth place in the section but can still capture the fourth and final playoff spot with a win against North Hills on Wednesday night. The Indians can reach the playoffs with either a win or a tie. Kickoff for Wednesday’s game against North Hills is set for 7:30 p.m.