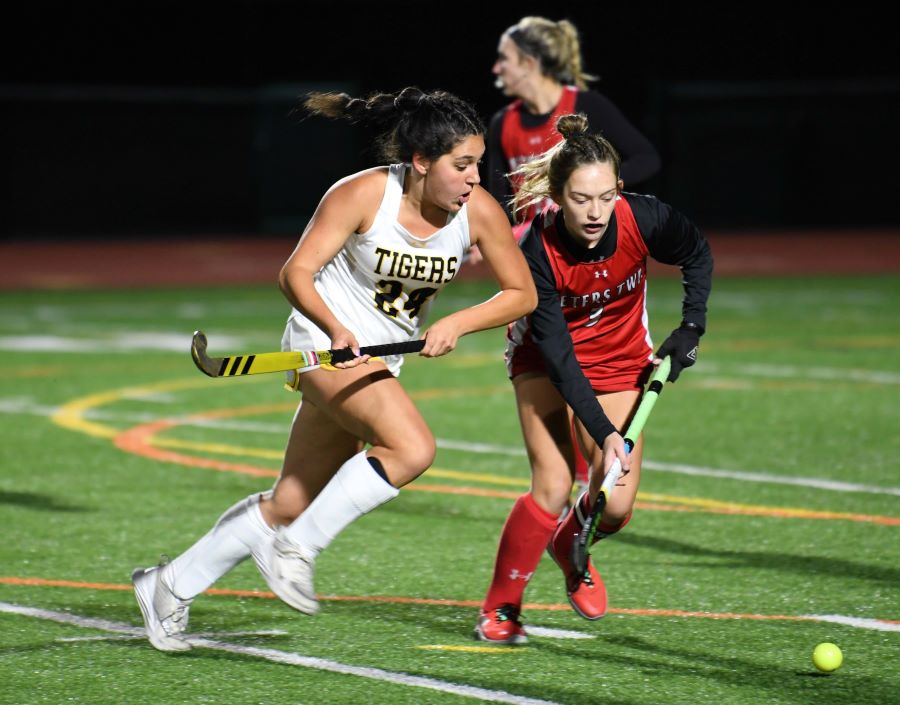 After splitting a pair of one-goal games in the regular season, second-seeded North Allegheny and third-seeded Peters Township once again played in a tightly contested affair on Thursday night. In the WPIAL Class AAA semifinals at Pine-Richland High School, it was the Tigers who prevailed in the rubber-match by a 1-0 decision.

Following scoreless first quarter, North Allegheny struck first when senior Lauren Kampi started a rush from deep in the Tigers’ own defensive zone. Kampi eluded several defenders and threaded a pass to fellow senior Mila Prusak, who fed a pass ahead to Isla Abrams. The speedy junior forward streaked past the defense and directed a shot off of Peters Township goalie Grace Urban and into the back of the net for a 1-0 lead with 11:29 remaining in the second quarter.

The goal by Abrams was her team-leading 25th of the season, and sparked an offensive surge for the black and gold through the remainder of the first half. The Tigers led in penalty corners 11-3 on the night with eight of which coming in the first half.

Peters Township’s best scoring chance came with five minutes left in the second quarter but senior goalie Jordan Ashbaugh stonewalled the Indians with back-to-back saves in a sprawling effort to keep NA’s one-goal lead intact. Ashbaugh finished with six saves for her 11th shutout of the season and 26th of her career, earning her Wright Automotive Player of the Game honors.

In the second half, the Indians applied more sustained pressured in Tigers’ territory but was unable to find the equalizer as Ashbaugh and the NA defense turned Peters Township away for a 1-0 victory.

The win improves North Allegheny’s record to 13-4-1 on the campaign, while Peters Township finishes the season with a 12-7 mark. The Tigers will take on Pine-Richland on Saturday at 4:00 p.m. from W&J’s Cameron Stadium in the WPIAL Class AAA championship game. The contest is a rematch of last year’s title tilt. The game will be broadcast live by the North Allegheny Sports Network.