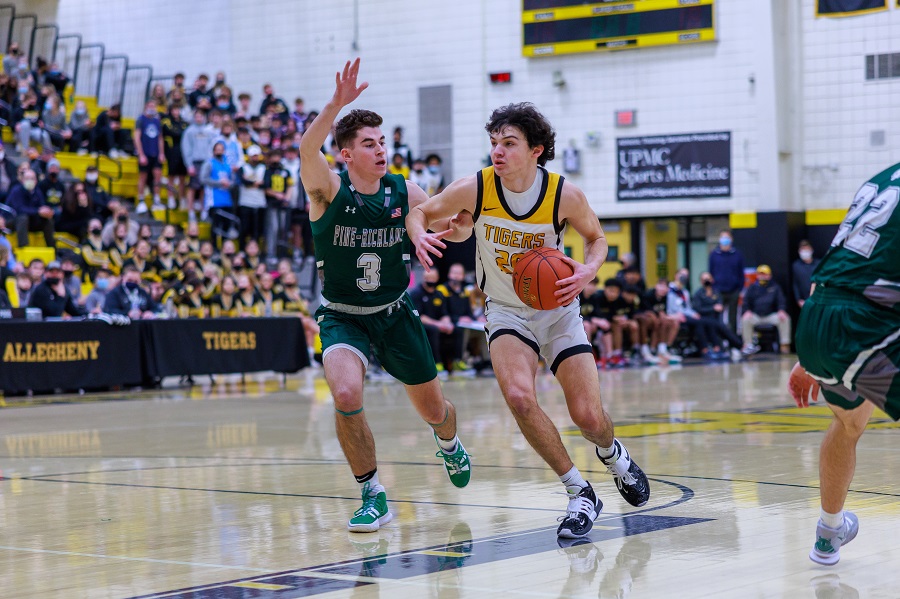 The North Allegheny boys’ basketball team took a big step toward the postseason with a 68-62 victory over Pine-Richland in Section 1-6A play. Having already won the season series with section foe Seneca Valley earlier on, Tuesday’s outcome against Pine-Richland also secures a season series win against the Rams. With two section games left to play, the Tigers have a one game lead in the standings over Seneca Valley and Butler.

Against Pine-Richland, the visiting Rams were the ones who had the hot hand early with five three pointers, three of which from senior Luke Shanahan and two from senior Nathan Zavasky. Shanahan’s 13 points in the first half helped Pine-Richland take a 26-15 lead after one quarter of play. For the night, Shanahan totaled a game-high 22 points.

While Pine-Richland seemed to be hitting on all cylinders in the first quarter, the North Allegheny defense put the brakes on the Rams in the second quarter, allowing a paltry eight points in the period. With the Rams held at bay, North Allegheny chipped away with a persistent effort to get to the rim. Senior forward Connor Casten allowed the Tigers to keep pace with 10 first half points and a pair of old fashioned 3-point plays. With the help of Casten, North Allegheny to pulled to within five points at the half, trailing 34-29 at intermission.

The Tigers continued to chip away at the deficit in the second half and tied the game at 45-45 early in the fourth quarter. The knifing drives to the basket by Robby Jones, along with two 3-pointers by the senior guard, helped North Allegheny take the lead for good in the final stanza en route to a 68-62 win. Jones scored 18 of his 21 points in the second half and helped ice the game with 5-for-5 shooting from the free-throw line. For his efforts, Jones was selected as the Wright Automotive Player of the Game.

Another contributor on the inside was sophomore forward Joey Dopirak with 16 points and senior guard Matt McDonough added 10 points and was 6-for-6 at the charity stripe. Collectively, the Tigers made 18-of-19 free-throw attempts on the night.

Along with Shanahan, Pine-Richland senior Andrew Alexander also reached double figures with 13 points before fouling out in the waning minutes of the game.

With the win, North Allegheny improves to 12-6 overall and 4-6 in Section 1-6A. Pine-Richland slides to 10-8 overall and 5-4 in section play. The Tigers will host Albert Gallatin for a non-section game on Saturday at 7:30 p.m. on Senior Night.