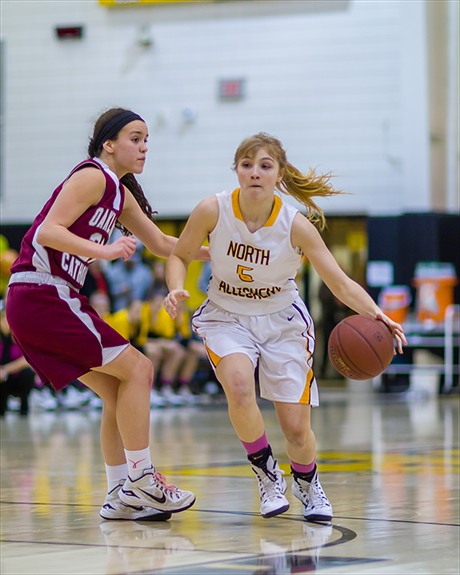 For the second straight season the North Allegheny girls’ basketball team opened the PIAA playoffs with a blowout victory as the Lady Tigers crushed the Central Tech Falcons, 70-23, on Friday night.  Playing motivated and focused basketball, North Allegheny made the trek to Erie and used a 20-0 run in the first quarter to take a strangle hold of the game.

Central Tech folded under NA’s press defense and turned the ball over 22 times on the evening. The Tigers utilized those turnovers for a commanding 22-2 lead in the first quarter and never looked back.  Senior Devvin LaBarge drained two 3-pointers during the run on the way to a 12-point performance, and senior Abby Gonzales dished out six assists in the run and finished the night with a game-high 19 points and three steals.  For her efforts, Gonzales was named the Wright Automotive Player of the Game.

Central Tech, the District 10 champions, began to chip away at the Tigers lead and cut the score to 25-14 by the end of the first quarter.  However, woeful free-throw shooting and NA’s tenacious defense prevented the Falcons from ever getting off the ground in their first state playoff appearance since 2007. Following the first quarter, Central Tech made only one field goal in the remaining 24 minutes and shot an anemic 13 percent (6 for 46) from the field.  The Falcons free throw shooting was only slightly better, converting on 10 of 27 attempts for a 37 percent rate.  Senior Abby Klemm tallied a double-double for Central Tech with 13 points and 13 rebounds.

For North Allegheny, 10 different players scored as the Tigers coasted to the win in the second half.  Junior Taylor Lake collected eight points and 13 rebounds.  Senior Meg Morningstar had a terrific all-around performance with nine points, eight rebounds, five steals, four assists and two blocks. Senior Karlee Helbling added eight points and was 2 for 2 from beyond the arc.

North Allegheny improves to 23-3 on the season while Central Tech concludes the year with a 20-5 record.  The Lady Tigers move on to the second round of the PIAA playoffs to face the Penn Hills Indians on Tuesday night at a site and time to be determined.  It will be the second meeting between the two teams this season.  North Allegheny defeated Penn Hills at the Wright Automotive Tip-Off tournament in December by a 48-37 decision.