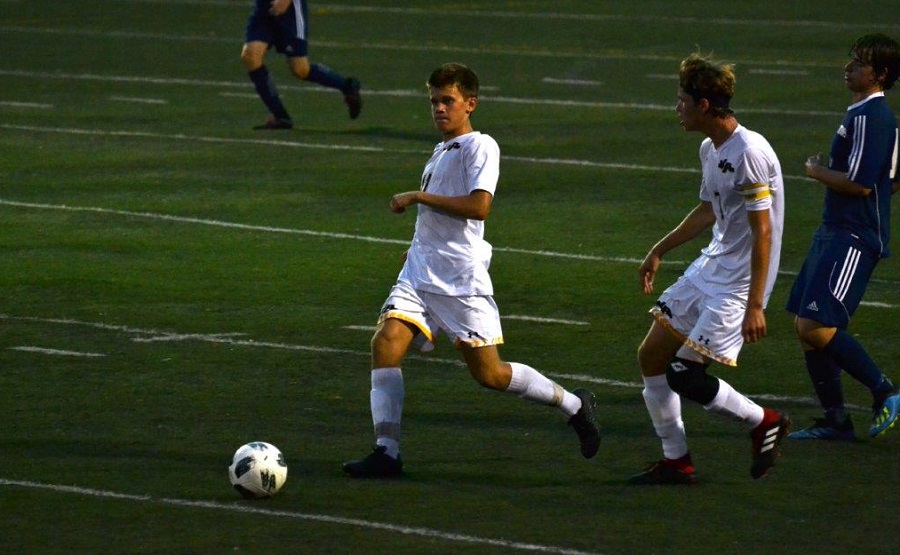 NA rebounds with 2-0 victory over Allderdice

There was a fall chill in the air at Cupples Stadium on the South Side as North Allegheny Boys Soccer took on the Taylor Allderdice Dragons, missing several key players due to injury and illness.  The Tigers used goals by juniors J.D. Runatz and Matt Van Kirk to beat the Dragons, 2-0, and remain in second place for the section.

As the first half commenced, senior goalie Devon Angermeier was quickly tested at the 36:25 mark.  A turnover by the Tigers defense allowed a Dragon forward to unleash wicked strike from close range.  Angermeier was able to make a one handed save, pushing the path of the ball northward above the crossbar. One minute later, Van Kirk received a well-played pass from senior Nick Bridges and drove a volley towards the net that the Allderdice goalie was able to deflect.  A quick Dragon counter attack found junior defender Jason Roman needing to snuff a hard shot from just outside the 18’.  Roman continued with multiple defensive gems throughout the afternoon’s play.  The Tigers were able to find the back of the net early in this one as junior midfielder Will Cinker slid a sharp angled through ball behind the Dragon back line where Runatz beat his defender and buried his first goal of the season and a 1-0 lead.  The best scoring chance for the balance of the half was at the 8:00 mark when senior defender Niko Hindsbo took a direct free kick from 20’ that sailed just high and wide left of the frame.

The second half began with each team trading close to equal possession time through the first 15 minutes.  A great scoring opportunity came at 23:58 when Van Kirk beat his defender and got off an angled rolling shot from the right that caromed off the left post and back to Cinker.  After drilling one off the goalie, Cinker slid the rebound to junior forward Sam Passodelis who one timed a shot that rose above the crossbar and out of play. The Tigers persistence in the offensive end would eventually pay off.   At 9:41, Bridges earned possession in the Dragons end and swung it wide left to Cinker on the wing and from about 30’ out launched a rainbow cross toward the back post.  Van Kirk, who had out-positioned his defender to be able to land a solid header that found its way past the Dragon goalie, giving the Tigers a 2-0 lead that would hold for the balance of the match.  Senior center-backs Austin Smith and Brennan Donovan once again delivered stout defense, partnering with Angermeier and several rotating outside backs earning the Tigers fifth clean sheet of the season.

The Tigers outshot the Dragons 11-4 and had a nine-minute edge in possession time.  The Tigers improve to 6-2 in section play, 7-2 overall, and will play host this Tuesday to the Seneca Valley Raiders at Newman Stadium. The game between NA and SV will be broadcast live via the internet by the North Allegheny Sports Network.