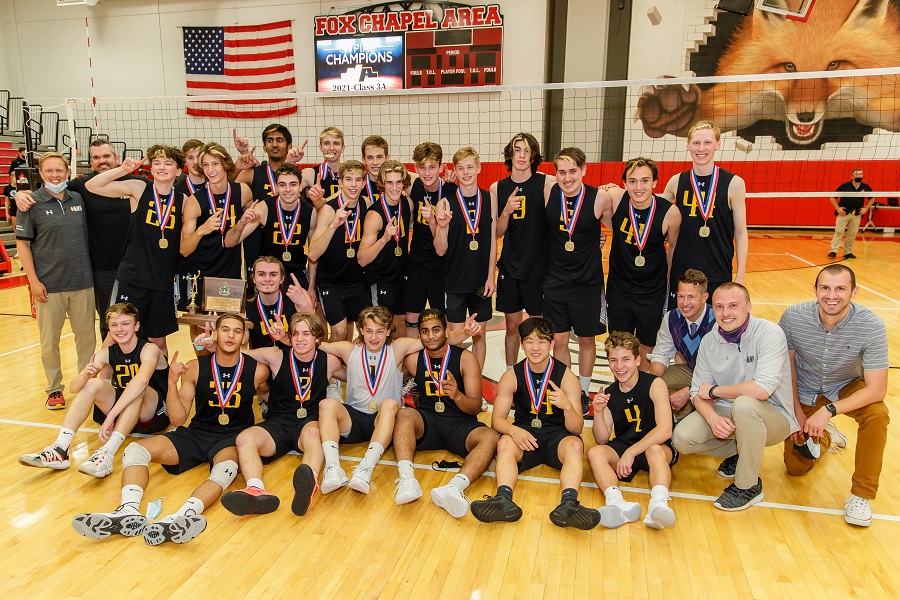 The North Allegheny boys’ volleyball team won its fourth consecutive WPIAL championship with a hard-fought 3-1 victory over section rival Seneca Valley on Wednesday night at Fox Chapel High School. It’s the 15th WPIAL title in the last 18 seasons for the Tigers and the team’s 21st WPIAL crown overall. During the 19-year tenure of head coach Dan Schall, the Tigers have posted an astonishing WPIAL playoff record of 50-3.

Seneca Valley was hoping to win its first WPIAL title on Wednesday night and appeared in the title tilt for the third time in program history. The Raiders, ranked third in the state by the PVCA, gave the Tigers all they could handle in all four sets and got off to a great start by winning set one, 25-22. Seneca Valley was powered by Baldwin Wallace commit Michael Devlin with five kills in the opening set, finishing with a team-high 18 kills. Juniors Nathan DeGraaf and Dawson Ward were also a big part of the Raiders attack with 13 kills apiece.

North Allegheny answered back in set two and displayed the resolve and resiliency of a champion. Even when a 5-0 run by Seneca Valley erased an early lead, the Tigers hung tough to stay close with Raiders throughout. Trailing 18-16, the Tigers made their push thanks to strong play out of the middle from Timmy Ditka. The senior middle blocker tallied four kills and two blocks in the set, many of which coming down the stretch as the Tigers prevailed, 25-23. Ditka totaled nine kills and four blocks on the evening.

In set three, the score was deadlocked at 23-23 with the momentum of the match teetering in the balance. A Seneca Valley hitting error gave NA the lead and senior Michael Mosbacher, a Saint Francis University (PA) commit, ended the set with a tip to give the Tigers a crucial 25-23 victory. Mosbacher finished with 12 kills and three aces.

Sensing victory was at hand, North Allegheny continued to surge in the fourth set, and despite a narrow margin, led most of the way. Leading 20-19, the Tigers closed out the win by taking five of the next seven points for a 25-21 win. Once again, Mosbacher delivered the ending point to propel the Tigers to their fourth straight WPIAL championship.

North Allegheny leaps to 15-0 on the season with the championship victory and extends its winning streak to 61 in a row. The Tigers will now turn their focus toward repeating as state champions for a third straight time when the PIAA tournament begins on Tuesday, June 1.