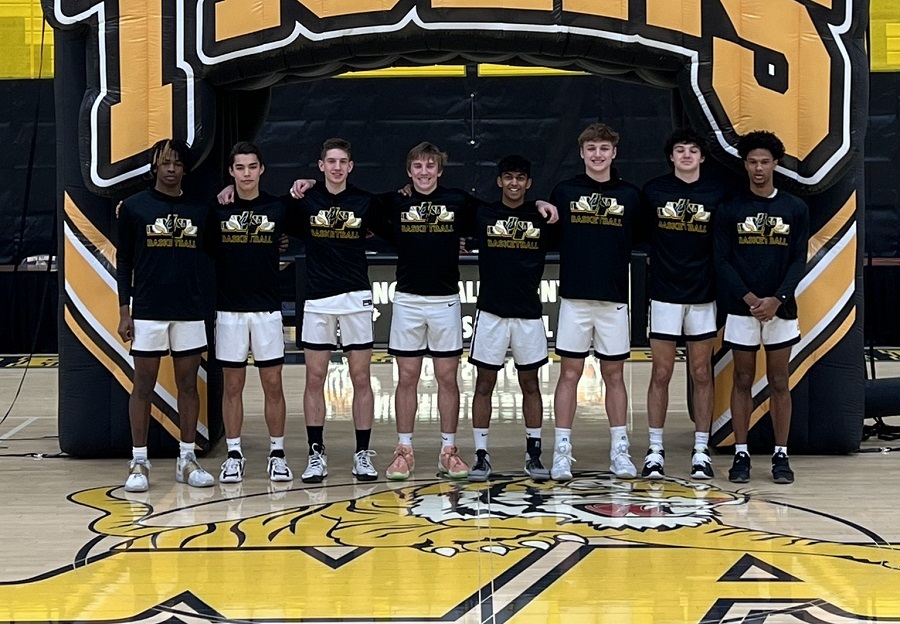 The North Allegheny boys’ basketball team won its fourth consecutive game on Saturday night at the Hoops for a Cure Classic with a 76-27 win over Albert Gallatin. The Tigers jumped out to 29-4 lead in the first quarter and coasted to the victory the rest of the way.

On senior night, all eight North Allegheny seniors scored in the game, including Kolin Dinkins, Kyrell Hutcherson, Erik Sundgren, Matt McDonough, Connor Casten, Robby Jones and Atharva Sumant. All of the NA seniors were recognized as the Wright Automotive Players of the Game.

In all, 12 Tigers scored in the blowout victory and the team collectively poured in 11 3-pointers on a hot shooting night from the perimeter. Sophomore Anthony Sciote returned to the lineup and scored nine points off the bench thanks to a trio of treys. Sophomore Joey Dopirak was the game-high scorer with 12 points. Albert Gallatin was paced by sophomore Kameron Pratt’s nine points.

North Allegheny leaps to 13-6 overall with the non-section victory, while Albert Gallatin falls to 8-9. While the Tigers didn’t play a section game on Saturday, the team did clinch a playoff spot thanks to a Seneca Valley loss to North Hills earlier in the day. The playoff-bound Tigers will visit Butler on Tuesday night at 7:30 p.m. in a Section 1-6A contest.