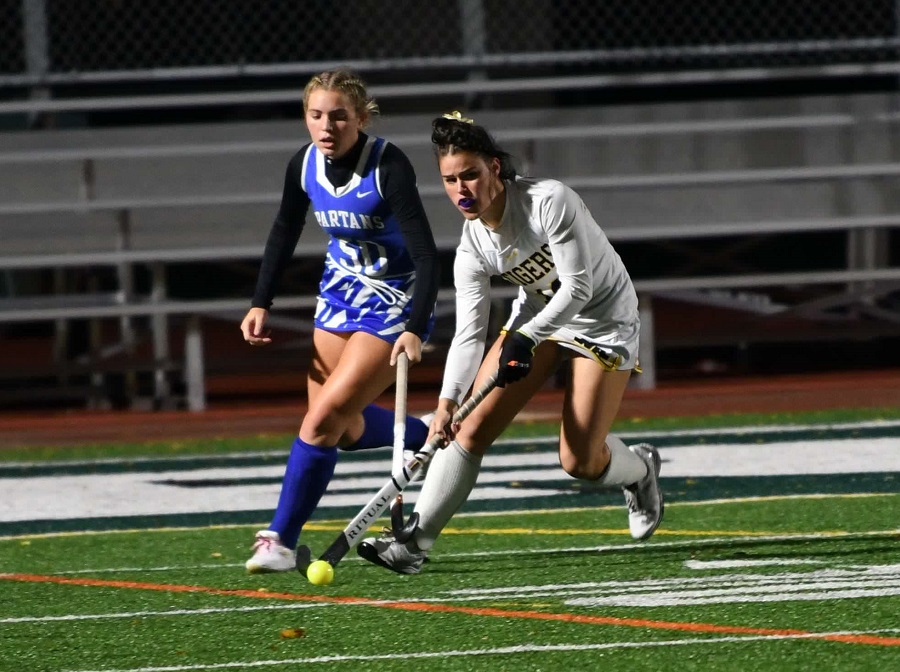 NA Advances To WPIAL Finals With 4-1 Win Over Hempfield

The North Allegheny field hockey team punched its ticket to the WPIAL Class AAA championship game for the first time since 2017 with a 4-1 win over Hempfield on Tuesday night. Junior Mila Prusak posted her third hat trick of the season to help propel NA to victory in the WPIAL semifinals held at Pine-Richland High School.

A perennial playoff participant, North Allegheny was facing a Hempfield team that was making its first postseason appearance in program history. The Tigers pounced on the Spartans in the first quarter when junior Sofia Mianzo angled into the circle from the right wing and centered a pass in front for Prusak, who cashed in for her first goal of the night and a 1-0 lead. Prusak’s goal came with 5:59 remaining in the opening stanza.

With 12:39 left in the second period, North Allegheny capitalized on its second penalty corner opportunity of the night. Junior Lauren Kampi netted her 13th goal of the season, assisted by Tanvi Challa, to increase the NA advantage to 2-0. A sparkplug for the Tigers offense and a contributor on defense as well, Kampi was selected as the Wright Automotive Player of the Game.

While North Allegheny held the advantage in scoring chances through most of the first half, Hempfield drew back-to-back penalty corners just before intermission. With no time on the clock, junior Jordan Ashbaugh denied Delphine Vandael and the Spartans on the final shot of the half to keep NA’s two-goal lead intact.

In the third quarter, Hempfield raised its intensity level and Vandael brought the Spartans within striking distance with a goal with 12:05 left in the period, trimming the score to 2-1, Tigers.

Including a big save by Ashbaugh with five minutes left in the quarter, North Allegheny staved off Hempfield through the remainder of the third period before putting the Spartans away in the final stanza. Prusak scored her second of the night with 10:48 remaining on a penalty corner, and she tallied another on a tip-in just two minutes later to grow the Tigers lead to 4-1. With the hat trick, Prusak boasts a team-leading 19 goals on the season. Hempfield mustered very little in the waning minutes as the Tigers earned the three-goal victory.

On the season, North Allegheny improves to 12-7 overall, while Hempfield’s first-ever winning season ends with a mark of 10-7. The Tigers will seek their 14th WPIAL title on Saturday night against the reigning WPIAL champion Pine-Richland Rams. The Rams are searching for their third straight crown. The game, which will be broadcast on the North Allegheny Sports Network, is slated fore Saturday night at 7:00 p.m. at Washington & Jefferson College’s Cameron Stadium.