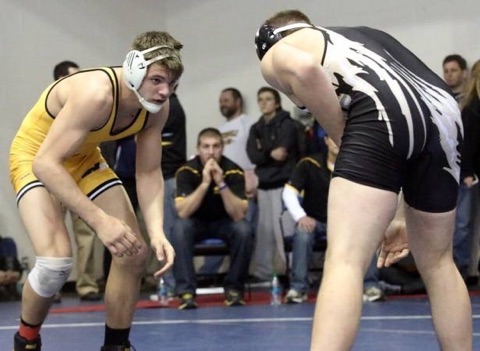 Beset by injuries all season long, the North Allegheny wrestling team was as healthy as ever on Wednesday night and it showed as the Tigers upset Waynesburg and Franklin Regional to open the WPIAL Team Tournament. The NA grapplers topped the Raiders, 42-20, in the first round and beat up on the host Panthers in the quarterfinals, 37-20. North Allegheny advances to the WPIAL semifinals on Saturday at Penn Hills where the Tigers will face top-seeded Belle Vernon.

In the first round matchup with Waynesburg, North Allegheny fell behind 8-6 four bouts into the dual meet but won the next seven bouts to turn the tables on the Raiders. At 160 pounds, Sean Hoover earned a 2-1 decision over Kyle Homet to give NA a 9-8 lead. Jacob Fritch followed with a win by fall at 170 pounds over Andrew Cain to increase the Tigers advantage to 15-8.

The next bout pitted two of the very best in the WPIAL at 182 pounds and Jake Woodley was able to score the winning points in the waning seconds of the bout to steal away a 5-4 decision over Colin McCracken. The win by Woodley gave the Tigers an 18-8 lead, but more importantly a wave of momentum which North Allegheny rode toward victory.

A Francis Duggan (195) win by fall and a Derek Devine (220) 5-0 decision over Spencer Lesinski brought the team score to 27-8, Tigers. Chuck Sanders clinched the victory for NA with a fall over Chase Ownes and needed just 33 seconds to do it.

The triumph over Waynesburg pitted the Tigers against a team that’s been a road block for the black and gold the last three seasons in the WPIAL Team Tournament, the Franklin Regional Panthers. North Allegheny had lost the last three consecutive seasons to the Panthers in the semifinals, but in this quarterfinal matchup it was NA who ruled the day.

As they did against Waynesburg, the Tigers fell behind in the early going and trailed 11-7 five bouts into the dual meet. North Allegheny received back-to-back falls from Woodley (182) and Duggan (195) and never looked back. After a 2-1 decision by FR’s Jake Pickup at 220 pounds cut the NA lead to 19-14, the Tigers picked up wins in five of the final six bouts, including a fall by Nick Pepe at 120 pounds over Mark Prucnal. Luke Landefeld locked up the victory with an 8-2 decision over James O’Neil at 126 pounds to bring the score to 34-20, Tigers. Zach Stedeford capped the win with a 3-0 decision over Nate Smith at 132 pounds.

North Allegheny improves to 8-6 overall on the season, but more importantly earns a spot in the WPIAL semifinals on Saturday afternoon against Belle Vernon. Start time is slated for 2:00 pm. For a look at the WPIAL Class AAA brackets, click here.