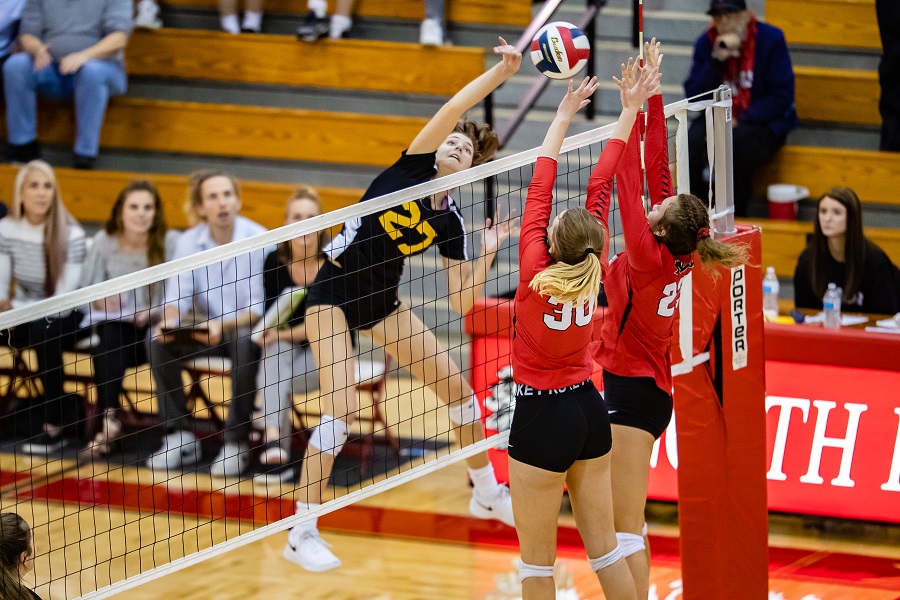 The North Allegheny girls’ volleyball team punched its ticket to the WPIAL championship for the third consecutive year and sixth time in the last seven years with a 3-0 sweep over the Moon Tigers on Wednesday night. NA won by set scores of 25-19, 25-17 and 25-8 in a dominant showing in the WPIAL Class AAAA semifinals.

Not since 2006 had Moon appeared in a WPIAL semifinal, which was also the last time it reached and won the WPIAL championship. The two-time reigning WPIAL and PIAA champions took advantage of Moon’s playoff inexperience and jumped out to a 12-4 lead in the first set. Junior Paige Miller helped lead the way in set one with four kills as the Tigers claimed a 25-19 win. Freshman Mia Tuman checked in for the final point and delivered a kill to finish off set one.

Finally settled in for set two, Moon displayed the talent that helped it garner the No. 4 seed in the Class AAAA bracket. Behind the powerful swings of sophomore Molly Simmons, who tallied three kills in the early going, Moon raced to a 7-1 lead. Undaunted, veteran North Allegheny shook off the deficit and rolled to a 25-17 victory. Senior Hannah Phillips totaled three kills, including a pair of kills for the final two points in the second set.

Phillips picked up where she left off in set three, with four kills early on as NA built a 12-5 lead. With a team-high 11 kills, Phillips was named the Wright Automotive Player of the Game.

Leading by seven, North Allegheny went on a 10-0 run thanks in part to the terrific serves of Caroline Curran. The freshman tallied a pair of aces during the run which proved to be the backbreaker for Moon. North Allegheny cruised to the finish for a 25-8 triumph and a 3-0 sweep of Moon.

North Allegheny improves to 18-0 on the season with its 65th consecutive win. NA will take on third-seeded Canon-McMillan on Saturday at 6:00 p.m. The contest will be broadcast live via the internet on the North Allegheny Sports Network.