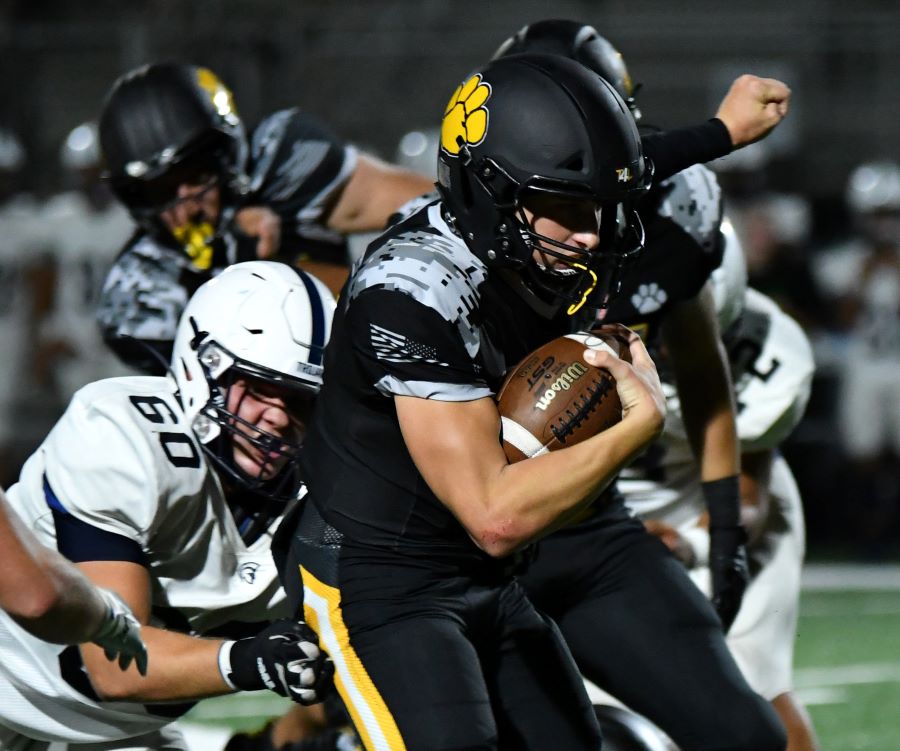 North Allegheny rallied from an 11-point second half deficit to earn a 29-18 non-conference win over the McDowell Trojans on Friday night at Newman Stadium. The Tigers trailed 18-7 late in third quarter before staging a thrilling come-from-behind victory. Junior quarterback Logan Kushner helped spearhead the rally with 204 yards passing and three touchdowns, and added a rushing score to earn Wright Automotive Player of the Game honors.

The first quarter got off to a sluggish start for both teams with the only score coming on a safety by McDowell for a 2-0 lead with 7:12 remaining in the period. For much of the first half, the Trojans were able to move the ball well with their running game but several drives stalled because of penalties or timely stops by the NA defense. On the night, McDowell committed 18 penalties for 211 yards. Despite the penalties, McDowell did manage to add to on to the lead with 3:26 left in the second quarter on a 26-yard field goal by Alex Sontheimer for a 5-0 advantage.

North Allegheny got its offense revved up on the ensuing possession and capped a 65-yard scoring drive on a 29-yard touchdown pass from Kushner to junior receiver Khiryn Boyd to take a 7-5 lead with 1:58 left in the first half.

In the second half, McDowell took the lead back on a lengthy 8-play, 92-yard drive that culminated on a 29-yard touchdown pass by Ben Moore to Christian Santiago. The two-point conversion attempt failed and McDowell led 11-7 with 6:06 left in the third period.

North Allegheny fumbled the ensuing kickoff and McDowell’s Stephon Porter recovered ball and returned it to the NA 6-yard line. Three plays later, senior running back Artis Simmons scored on a 2-yard run to increase the Trojans lead to 18-7 with 4:41 remaining in the third quarter. Simmons toted the ball 26 times for 161 yards and a touchdown. Moore also aided the McDowell ground game with 66 yards on 18 carries.

Undaunted, the Tigers didn’t panic from the 11-point deficit and began to mount a comeback with a 10-play, 73-yard drive late in the third period. The march concluded on a 4-yard rushing score by Kushner on a bootleg on the final play of the third quarter, cutting the McDowell lead to 18-13. A two-point conversion pass from Kushner to tight end Daniel Sellers trimmed the deficit to 18-15.

Looking to put the game out of reach in the fourth quarter, McDowell used another lengthy drive to move the ball to the NA 19-yard line. However, on a 1st and 10, senior linebacker Ian Zahorchak sacked Moore and forced a fumble that was recovered by junior Aidan Buggey at the NA 26-yard line. Just one play later Kushner tossed a swing pass to Boyd who weaved through defenders for a 74-yard touchdown and NA leapfrogged ahead for a 22-18 lead with 8:29 left in the fourth quarter. Boyd finished the night with five catches for 133 yards and two touchdowns.

After the Trojans were forced to punt on their next drive, the Tigers iced the game with a five-play, 73-yard drive. North Allegheny culminated the possession with a 32-yard touchdown pass by Kushner to senior receiver Rourke Kennedy for a 29-18 advantage with 4:17 remaining in the contest. The Kennedy touchdown was the final score of the night and the Tigers prevailed for the non-conference victory.

In addition to Kushner and Boyd’s big nights in the passing game, senior running back Andrew Gavlik rushed for 92 yards on 13 carries. On defense, linebacker Kevin O’Donnell led with 11 tackles. Junior linebacker Tyree Alualu also forced a first half fumble and finished with seven tackles.

With the win, North Allegheny improves to 3-0 on the season, while McDowell suffers its first loss to fall to 2-1. The Tigers will host Baldwin next Friday in another non-conference contest at Newman Stadium.