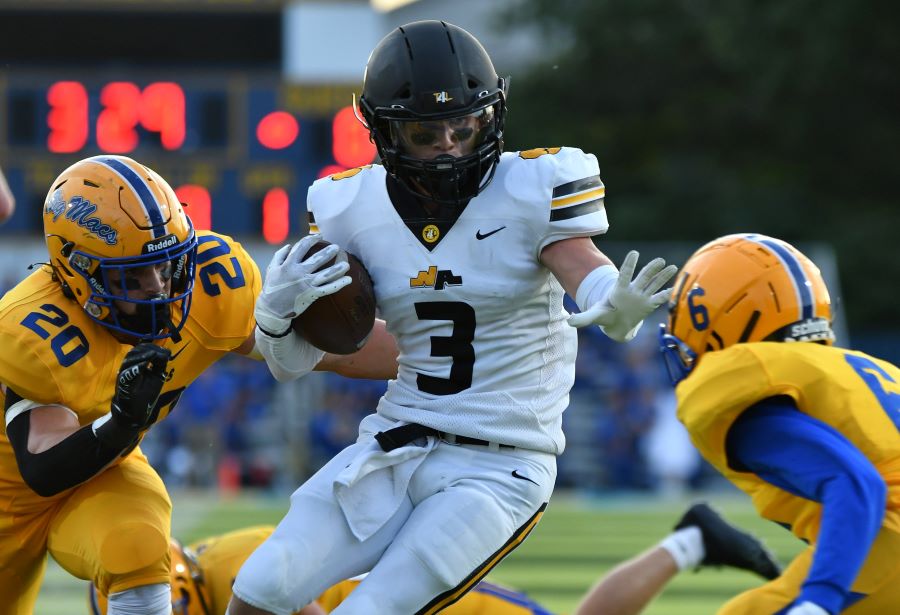 North Allegheny built a 27-0 lead and staved off a second half rally by Canon-McMillan for a 35-21 victory at AHN Stadium on Friday night in the Class 6A Tri-County Conference opener. It’s the seventh consecutive win for the Tigers in the head-to-head series since the Big Macs’ move up to Class 6A in 2018.

In a rematch of last year’s WPIAL quarterfinal, the Big Macs had revenge on their mind and started the game with a lengthy drive that eventually stalled at the NA 24-yard line. Following a turnover on downs by CM, the Tigers marched 76-yards for the game’s first score. Senior running back Andrew Gavlik culminated the drive with an 11-yard touchdown run with 3:25 left in the first quarter for a 7-0 lead.

After a three-and-out by Canon-McMillan, junior Evan Lyon returned a punt 47 yards to the CM 4-yard line to set up NA’s next score. On a 4th and goal, Gavlik crossed the goal line on a 2-yard run to increase the Tigers lead to 14-0 with 0:38 left in the first.

North Allegheny added on to the lead with 8:50 left in the second quarter on a Logan Kushner 12-yard touchdown pass to Khiryn Boyd for a 20-0 advantage. The extra point kick was blocked by CM’s Kaeden Singleton. 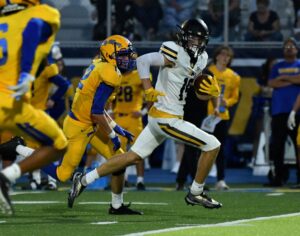 Evan Lyon races past the Canon-McMillan defense for a 60-yard touchdown run in the second quarter.

With 5:09 remaining in the second period, Lyon took a reverse 60 yards for a touchdown and a 27-0 North Allegheny lead.

While it appeared the Tigers might earn a second consecutive mercy-rule win, the Big Macs flipped the momentum when senior Treyvon Mullen intercepted a pass with 2:46 remaining in the half and returned it 15 yards to the CM 45 yard line. Canon-McMillan capitalized on the turnover and scored with 17 seconds left in the half on a Mikey Evans to Mullen 8-yard touchdown pass, cutting the NA lead to 27-7.

In the second half, four North Allegheny fumbles sparked Canon-McMillan’s comeback bid. On a 4th and 17, Evans heaved a 28-yard touchdown pass to senior receiver Austyn Winkleblech to trim the score to 27-14 with 4:28 remaining in the third period. Following an NA fumble, the Big Macs cashed in 14 seconds later for a 32-yard Evans to Winkleblech touchdown pass and the NA lead was trimmed to 27-21. Winkleblech, a Pitt recruit in baseball, finished the night with seven receptions for 112 yards and two touchdowns.

Another NA fumble gave Canon-McMillan the ball back with a chance to take the lead. However, a third down sack by senior linebacker Kevin O’Donnell short-circuited the Big Macs drive at the NA 45-yard line. It was one of two sacks on the night by O’Donnell and several timely defensive stops.

The Tigers mounted what proved to be the game-clinching drive in the late stages of the third quarter. A 46-yard burst by Gavlik moved the ball to the CM 35-yard line. As the drive moved into the fourth quarter Kushner dialed up a 33-yard pass to Boyd at the CM 1-yard line. Gavlik culminated the possession on a 1-yard rushing score, his third of the game, for a 33-21 lead with 10:40 to play in the final period. Kushner connected with Boyd for a two-point conversion to increase the NA lead to 35-21.

In the remaining minutes, Gavlik and the Tigers were able to grind down the clock to close out the conference victory. Gavlik totaled 110 yards rushing and three touchdowns on 21 carries. Gavlik and Lyon, who also intercepted a pass in the second half in addition to his 60-yard touchdown and lengthy punt return, were named the Wright Automotive Co-Players of the Game.

Kushner completed 12 of 19 passes for 195 yards, a touchdown and an interception. Boyd hauled in seven passes for 135 yards and a score. Evans was 16-for-43 for 198 yards and three touchdowns for the Big Macs.