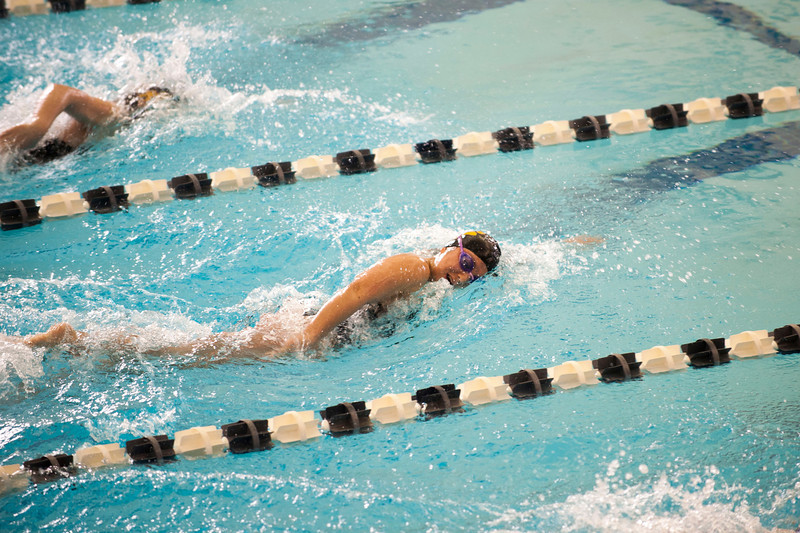 North Allegheny’s Tigers dominated the host Moon Area Tigers in Thursday night WPIAL AAA Section 2 swimming action.  In a theme that has helped to identify the season, this version of the NA Tigers continues to establish new pool records at seemingly every venue at which they swim.  NA’s Tigers won by a final score of 107 – 70 for the Girls and 110 – 67 for the Boys.

The NA Girls set the tone early with Junior Jacquelyn Du, Sophomore Erin Kuhn, and Juniors Kayla Churman and Morgan Soulia smashing the pool record in the 200 Yard Medley Relay with a time of 1:48.00.  Continuing for the Tiger Girls, a sweep of the 200 Yard Individual Medley was led by Soulia with a winning time of 2:09.99, followed by Freshman Megan Christy with Kuhn in third.  The 50 Yard Freestyle sprint saw similar results for the Tigers, with Senior co-Captain Kristen Bishop winning in 25.87 seconds, followed by Freshman Aimee Verardi in second and Sophomore Gianna Caputo in third place.

In the Girls 100 Yard Butterfly event, it was Churman leading the pack to the wall to touch first in a time of 59.72 seconds followed by Junior Charlie Brickner in second and Freshman Dani Torres in third.  Another event place sweep in the 100 Yard Freestyle saw Bishop swimming past everyone to win in 55.62 seconds followed by Sophomore Nicole Synan and Junior Claire Washabaugh.  In the 500 Yard Freestyle, it was Freshman Lauren McGrath winning in 5:15.14, with Du in second and Freshman Anna Verardi in third place.  In the 100 Yard Backstroke, it was the NA trio of Churman, Sophomore Christine Sun, and Freshman Eliza Ross finishing 1-2-3.  And in the 100 Yard Breaststroke, it was Brickner winning the event, followed by Junior Maggie Root and Freshman Caitlyn Edwards.

The NA Boys’ performance started with the 200 Yard Freestyle event which saw Junior Greg Arnold touching first with a time of 1:48.12, followed by Freshman Maxwell Gonzalez in second and Senior Gabe Gaspar in third.  The Tigers went on to sweep the next several events for the Boys on the evening.  In the 200 Yard Individual Medley, Senior co-Captain Zachary Buerger bested the competition in winning with a time of 1:56.30.  He was followed by Freshman Eben Krigger in second place and Sophomore Gage Halle in third.  Buerger also captured first place in the 100 Yard Butterfly while obliterating the pool record with a time of 50.77 seconds.  Junior Peter Neal and Freshman Eric Staab rounded out the top three places for the Tigers in the event.  Next was the 100 Yard Freestyle which saw the NA Boys sweep led by Junior Jake Krivacs with a winning time of 51.48 seconds followed closely by Senior Josh Tonti and Sophomore Dan Meehan.

In the Boys 500 Yard Freestyle swim, it was Senior co-Captain Sam Rutan besting the competition to set a new high school competition pool record with a time of 4:46.25.  Sophomores Michael Struk and Colin MacDonald completed the sweep of the event for the Tigers.  In the 100 Yard Backstroke race, Arnold touched first in 55.32 seconds followed by Gonzalez in second and Freshman Brett Edwards in third place.  Another place sweep of the 100 Yard Breaststroke saw Junior Casey Melzer winning in 1:00.28 with Krigger and Halle following him to the wall.  The NA Divers also got in on the record-setting when Junior Andrew Doerfler turned in a pool record-setting performance when he scored a total of 276.40 points for his efforts on the evening.

The Tigers begin to wrap up Section 2 swimming when they host the Shaler Titans on Thursday February 6 at 6:00 PM for Senior Night at the NASH Pool.