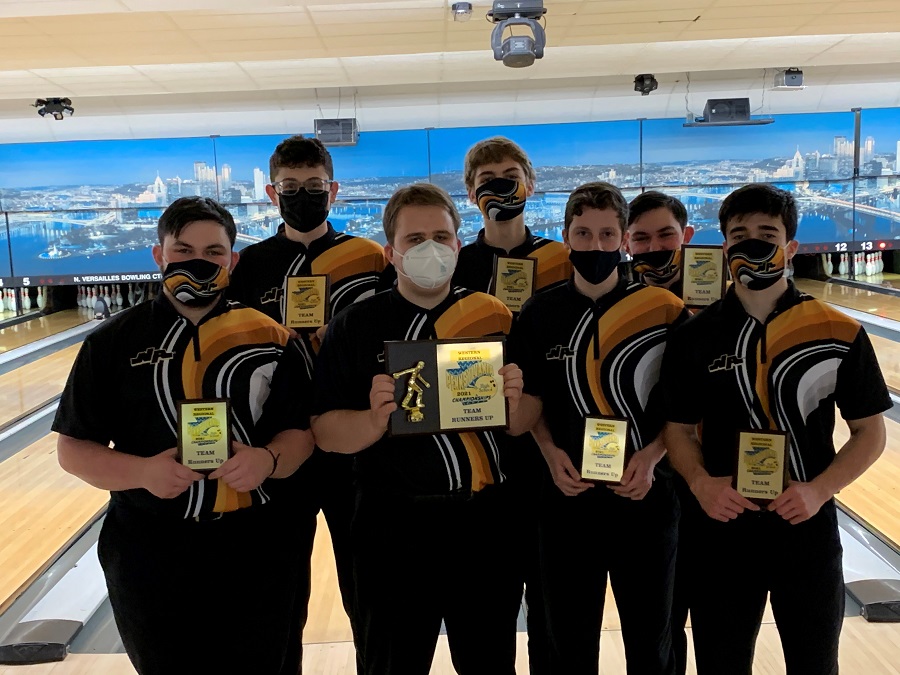 The top 18 high school bowling teams from the western half of Pennsylvania met up at North Versailles Bowling Center to battle it out and take home one of the three qualifying spots in the Pennsylvania State High School Championships.  NA entered the tournament as the #1 seed from the regular season and the 2021 Western Pennsylvania Interscholastic Bowling League Team Champions.  Bowling next to the Tigers were the Hempfield Spartans.  Hempfield held the #2 ranking from the regular season.  North Allegheny eliminated the Spartans 2-1 in the best of three Baker games in the semi-final round of the 2021 WPIBL Championships.  Hempfield finished in third place.

This year’s team matches were bowled on the Kegel Challenge Series oil pattern entitled Stonehenge Modified.  This was a similar pattern to what was used at the Western Regional Singles Championships the day before.  The singles competition was bowled on a 41-foot pattern whereas the team competition utilized 40 feet of oil.

The Western Regional Team competition uses multiple game formats to slim down the qualifying field.  The first round of qualification began at 9am with each team of five bowlers completing three traditional games.

The Tigers started strong with a first game total of 950. Leading NA was senior Dylan Scheidler with a 238.  Scheidler has been a leader for North Allegheny all year long and qualified for the Pennsylvania State Singles Championships the day before.  Scheidler’s 238 was the third highest game thrown to start the day.  Hempfield’s Dominick Vallano and Vincent Mincucci threw a 278 and 257, respectively.  Hempfield started the day with an 1108, which would be the highest traditional game thrown by any team for the competition.  After Game 1, NA was in 5th place.

Game 3 went to the Tigers as they were firing on all cylinders.  They threw the highest Game 3 of the tournament and the 3rd highest game for the day, 1019.  The dynamic duo of Lydon and Cook matched one another with a 227.  Joining the leaderboard were juniors Noah Sostmann (201) and Jeb Jorden (192).  Serra Catholic had another great 3rd game (998). Hempfield’s final game of the first round was a 932, good enough for ninth place.

For Round 2 of qualifications, the format changed from the traditional bowling game, into 3 sets of two Baker games.  The Baker format comprises of a team of bowlers who rotate bowling in each frame in a game. The leadoff person bowls frames one and six, the second person bowling frames two and seven, and so forth. In a Baker format, a higher emphasis is put on bowling as a team as each shot is crucial to the team’s success; emphasizing the idea of performing as a team by capitalizing upon each other’s strikes and spares for team count.  As the tournament is structured, only the best teams who bowl as a unit, can excel during the Baker round.

In the first Baker game, NA bowled a 186.  Strikes were thrown by Jorden, Scheidler, and Cook.  To start the second game, lefty Noah Sostmann threw a difficult to convert split comprised of the 3-6-7 pins.  This is nearly impossible for a southpaw.   NA substituted in right-handed junior Gavin Rush.  Rush converted the spare which ignited a spark in the Tigers.  North Allegheny followed this with a turkey in frames 2, 3, and 4 from Lydon, Jorden and Scheidler.  The trio again combined for another turkey in frames 7, 8, and 9.    NA finished Game 2 with a 209 and a 395 for the first set of baker games.

Hempfield led all teams in the first set of Bakers with a 413 (233 and 180) and extended their lead over the Tigers to 36 pins.  There was no change in the rankings at the top of the leaderboard: #1 Hempfield, #2 NA, #3 Serra Catholic.

The Tigers made their move during the second set of Bakers.  Sostmann started the 3rd Baker game with a strike.  Jorden, Scheidler, and Cook then combined for a turkey in the 3rd, 4th, and 5th frames.  A second strike was added by Jorden in the 8th and Cook filled the 10th with a turkey.   The Tigers knocked over 226 for their highest Baker game of the day.

In game 4, Scheidler, Cook and Sostmann put together a turkey in frames 4-6.  Scheidler and Cook combined again for a double in the 9th and 10th frames and NA added 194 pins to their total.  North Allegheny’s second set of bakers totaled 420 and was the highest second set of any of the 18 teams.  Both Hempfield and Serra Catholic faltered throwing a 326 (170 and 156) and 325 (150 and 175), respectively.  NA jumped into first place with a 3773, while Hempfield dropped to second with a 3715.  Bouncing into the third position and surpassing Serra Catholic (3604) was Greensburg Salem with a 3606.

With a 170-pin lead above the cut, the Tigers entered the final set of Baker games with cautious optimism.  The goal for the day was a top-3 finish and moving on to the state championships.  If they bowled clean, consistent games and did not try to force the ball down the lane, a berth into the state championships was on the horizon.  In game 5, the trio of Lydon, Jorden, and Scheidler again combined to throw a turkey in frames 2, 3 and 4 with Cook being the consummate anchor and producing a turkey of his own in the 10th.  The Tigers finished with a 179 going into the final game of the qualifiers.

Leading off the final game, Sostmann and Lydon combined to throw a double to get started.  Lydon then partnered up with Jorden to throw another double in the 7th and 8th frames.  Cook added another strike in the 10th.  The final Baker game resulted in a 203 with a final Baker set of 382.  NA finished the Baker games with the 4th highest scores of the round.

The qualifying rounds were now official.  Leading all teams with a 4155 was North Allegheny.  Hempfield finished in second with a qualifying score of 4108.  Rounding out the top-3 was last year’s WPIBL team champions, Pittsburgh Central Catholic.  PCC had the best Baker series of all the schools (1262 for 6 games) and knocked Greensburg Salem out of the state playoffs, 4058 to GS’s 4030.

Aside from qualifying for States, the top three teams also moved on to final round of the Western Regional Championships, the best of three Baker game series.  NA’s first place qualification granted them a bye into the Championship Round.  In the head-to-head semi-finals, Hempfield took on the Pittsburgh Central Catholic Vikings.  The Spartans eliminated the Vikings in two games with scores of 196-174 and 206-171.

The final match of the PA State Western Regional Championships was a rematch of the WPIBL semi-finals.  In the previous meeting, the Tigers eliminated the Spartans by one pin in the final game.

Game 2 went to the Spartans 140-193.  Regrettably, a couple of untimely splits and two missed spares cost the Tigers in the second game.  Strikes were thrown by Lydon, Scheidler, Sostmann, and Cook.

The championship match was decided by the third and final Baker game.  After the first five frames, the teams were dead even with the second five frames remaining.  Unfortunately for the Tigers, Hempfield was able to string together a hambone, striking in frames 5, 6, 7, and 8.  This was enough to take control of the game and match.  For the Tigers, strikes were thrown by Jorden and Cook (2).  Even though the Tigers threw a clean game, it was the Spartans ability to gain the scoring advantage by linking their strikes together that made the difference.  This was the first match loss by the Tigers this season.

As one of the top 6 high school teams in the state, the Tigers will be back in action on Saturday, March 20, 2021.  The final competition of the season will determine the Pennsylvania State High School Team Champions.  The day’s events will be live streamed on the NA Bowling Facebook Page.