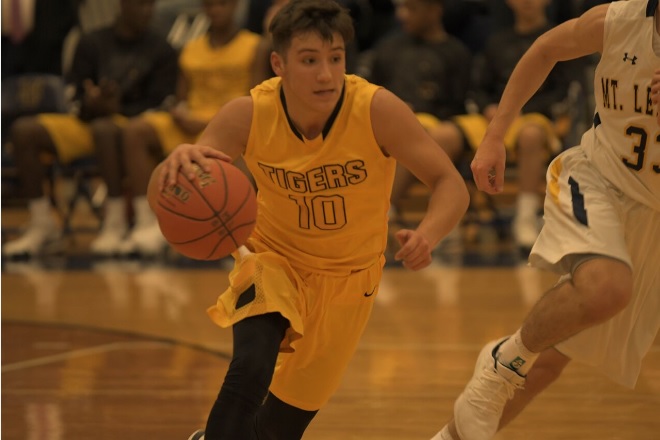 North Allegheny held a six-point lead at intermission but Mt.Lebanon stormed back in the second half to claim a 65-56 win over the Tigers on Tuesday night in non-section play. The host Blue Devils opened the third quarter on a 13-2 run to take the lead for good. Senior Sean Loughran led the Blue Devils with 19 points and 5-of-8 shooting from beyond the arc.

In the first quarter, the young Tigers withstood Mt. Lebanon’s pressure defense with poise and built a 9-0 lead to start the game. The NA advantage stood at 16-6 after one quarter of play, thanks in part to senior forwards Nico Erimias and Stephen Humphries, who each scored seven points in the first half. Erimias finished with 11 points on the night.

North Allegheny maintained a 10-point into the second quarter, holding a 30-20 advantage. Junior guard Mike Iuzzolino was a consistent force for the Tigers throughout the game and netted a game-high 20 points. For his efforts, Iuzzolino was named the Wright Automotive Player of the Game.

While, Mt. Lebanon managed to chip away late in the quarter, the Tigers still held a 32-26 lead by halftime.

After NA held steady against Mt. Lebanon’s pressure defense in the first half, the Blue Devils raised the intensity level and forced 12 of their 19 turnovers in the second half. The turnovers helped spark ML’s tide-turning 13-2 run to begin the third quarter. From there, the Blue Devils took command of the game en route to the non-conference win. Along with Loughran, senior Hayden Mitchell touched double figures with 14 points, including three 3-pointers.

Following the loss, North Allegheny slips to 1-2 on the season. Mt. Lebanon improves to 3-0. The Tigers will play in their home opener on Friday night against Cathedral Prep at 7:30 p.m.