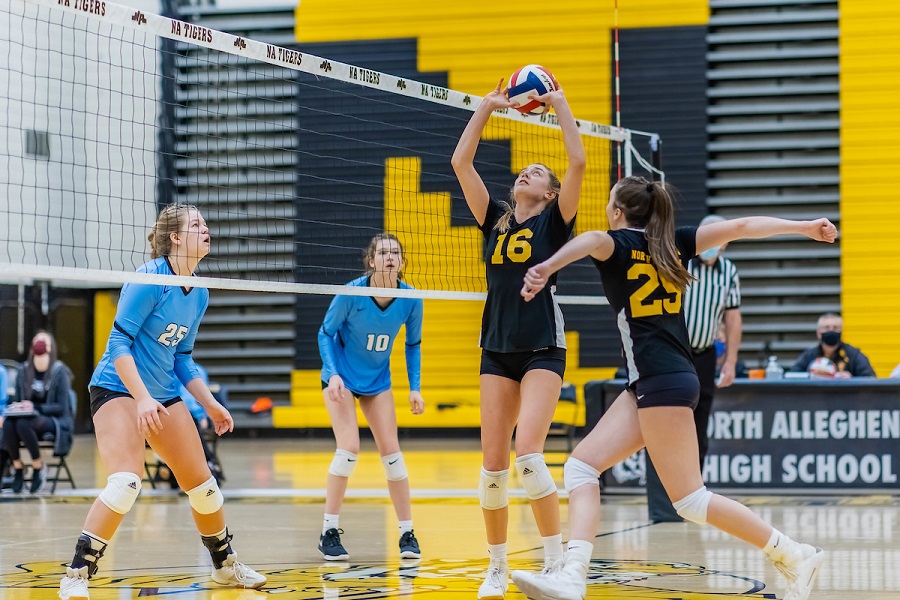 In a rematch of last year’s WPIAL Class AAAA quarterfinals, the North Allegheny girls’ volleyball team once again ousted the Seneca Valley Raiders from the postseason with a 3-0 sweep on Saturday afternoon. The Tigers advanced to the WPIAL semifinals by set scores of 25-15, 25-16 and 25-12. It’s the 11th win in a row for North Allegheny against their section rivals.

The tone was set early by the three-time reigning PIAA champions in set one. Despite falling behind 2-0, the Tigers rattled off eight straight points behind the fine serves of senior Paige Miller, who delivered a pair of aces during the 8-0 run. From there, North Allegheny ran away with the opening set, 25-15. Sophomore Mia Tuman contributed with two kills, on her way to a nine-kill afternoon. Junior Rachel Burton also chipped in with a pair of kills in the first set.

The Tigers jumped on the Raiders in the second set, opening up a 15-5 lead in the early going and rolling to a 25-16 win. Senior middle hitter Maddi Beer spearheaded the NA charge with four kills and three blocks, while Miller added two more kills.

In set three, the sweep was never in doubt as NA leaped to a 7-0 lead en route to a 25-12 triumph. Beer walloped the Raiders with five kills, matching Tuman for the team-lead on the day with nine kills. While also providing stellar play at the net, Beer was named the Wright Automotive Player of the Game.

With the win, North Allegheny improves to 13-0 on the season and will host Moon on Wednesday night in the WPIAL Class AAAA semifinals. The contest will be broadcast live via the internet on the North Allegheny Sports Network.