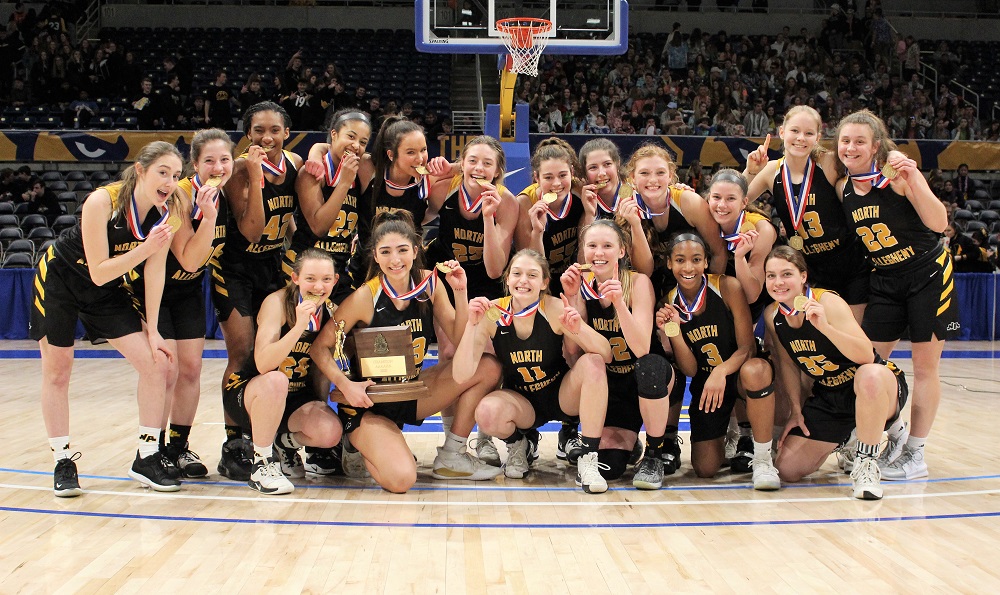 In an overtime thriller, the second-seeded North Allegheny girls’ basketball team prevailed over top-seed Bethel Park with a 54-50 victory at the Petersen Events Center in the WPIAL Class 6A championship game. With the Tigers trailing 50-49 late in overtime, junior Lizzy Groetsch’s drive and layup gave NA a 51-50 lead with 25 seconds remaining and proved to be the game-winning basket. Free throws by Jasmine Timmerson and Paige Morningstar in the waning seconds helped put the game away and gave North Allegheny it’s third WPIAL title in the last four seasons.

The Tigers have now made five consecutive appearances in the WPIAL championship game. Of those five title games, three of them have gone to overtime. The contest also marked the eighth consecutive year that head coach Spencer Stefko had guided a team to the WPIAL championship game. Stefko led Chartiers Valley to a 2013 title game appearance and Seton LaSalle to back-to-back WPIAL crowns in 2014 and 2015 prior to NA’s current run of five appearances in a row.

The contest was a test of wills between the two best defenses that Class 6A had to offer. In a back-and-forth battle, North Allegheny forged ahead to grab a 44-40 lead late in the fourth quarter. A Morningstar put-back and a Taylor Rawls runner gave NA the four-point advantage with two minutes remaining. However, Bethel Park senior guard Lauren Mullen made four consecutive free throws to tie the game, the last of which with 38 seconds left in regulation, to ultimately force overtime with a 44-44 deadlock.

In the extra session, the seesaw nature of the game continued. North Allegheny held a 49-48 lead before Division I recruit Olivia Westphal’s runner in the lane gave Bethel Park a 50-49 advantage with 51 seconds remaining in OT.

That set stage for Groetsch’s heroics and the go-ahead bucket with 25 seconds left to pull NA ahead, 51-50. Groetsch, a University of Pennsylvania recruit, tallied a team-high 19 points and also surpassed the 1,000-point milestone for her career. For her memorable performance, Groetsch was selected as the Wright Automotive Player of the Game.

Following the Groetsch layup, Timmerson came away with a steal and made two clutch free throws to advance the lead with 53-50 with 16.6 seconds remaining. On the ensuing possession, an errant Bethel Park pass was reeled in by Morningstar and the junior forward put the game on ice with a 1-for-2 trip to the free-throw line with 5.9 seconds in overtime, giving NA a 54-50 win.

Also contributing to the NA offense were sophomores Rawls and Emma Fischer, who both netted nine points, respectively. Fischer was a spark from the perimeter and drained three 3-pointers

With the WPIAL championship victory, North Allegheny improves to 22-3 overall. Bethel Park slips to 21-3 on the season. Both teams have qualified for the PIAA playoffs next week.