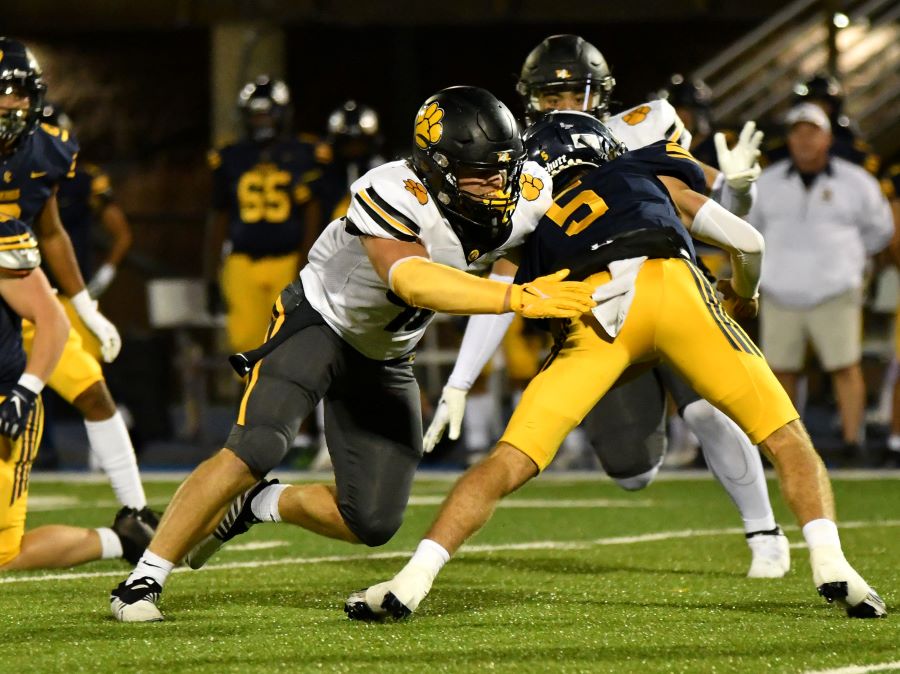 On the first Friday night of autumn, the North Allegheny Tigers won a defensive slugfest over the Central Catholic Vikings, 7-3, in a Tri-County Five Conference contest at West Mifflin High School. The NA defense limited the Vikings to 196 yards of total offense and came up with a critical stop on a fourth down play with 1:53 remaining in the game. The 10 points scored combined was the fewest in a game involving North Allegheny since the Tigers defeated the McDowell Trojans, 7-0, on Oct. 6, 2006. That same season, NA earned another victory with just one offensive touchdown when the Tigers beat Mt. Lebanon in the opening round of the WPIAL playoffs, 7-6.

Playing just miles away from Kennywood Park, the first half resembled a ride of bumper cars with each team hitting each other head on and not much to show for it. The Tigers and Vikings each committed two turnovers in the first 24 minutes and combined for only 159 total yards. Just before halftime, a Central Catholic drive was derailed thanks to an interception by junior defensive back Khiryn Boyd at the Vikings 48-yard line, keeping the game scoreless at the half.

North Allegheny’s first drive of the third quarter stalled at midfield, and on 4th down, a high snap sailed over punter Rourke Kennedy‘s head and was recovered by Kennedy at the NA 8-yard line. Poised to score the game’s first touchdown, the Vikings instead went backwards when junior defensive lineman Aidan Buggey sacked PCC quarterback Peyton Wehner on second down at the NA 13-yard line. Two plays later, Central Catholic settled for a 30-yard field goal by Billy Lech for a 3-0 lead.

The Vikings three-point lead remained intact until the Tigers embarked on what proved to be the game-winning drive in the fourth quarter. Beginning at their own 17-yard line with 9:37 remaining in the contest, North Allegheny traversed 83 yards on a drive that was keyed by a 34-yard run by senior running back Andrew Gavlik to the PCC 24-yard line. Two plays later, junior quarterback Logan Kushner dove into the end zone on a 7-yard touchdown run to give NA a 6-3 lead with 6:41 left in the game. Kicker Nick Van Winkle tacked on the extra point for a 7-3 advantage.

Keeper for @LoganKushner1 gives the Tigers the lead!!

On the ensuing possession, Central Catholic drove to the NA 19-yard line but again the Vikings’ drive stalled. On a 4th and 7, Wehner threw a fade to the end zone intended for Vernon Settles but the pass was broken up by senior cornerback Campbell Melzer to preserve NA’s 7-3 lead. Finishing with a team-high six tackles and making the night’s most critical defensive play in man-on-man coverage, Melzer was named the Wright Automotive Player of the Game.

Following the Melzer defensive stop, Central Catholic had two timeouts remaining and the North Allegheny offense still needed one more first down to clinch the victory. On a 3rd and 3 at the NA 26-yard line, Gavlik carried the ball 10 yards to seal a 7-3 conference win. On 24 totes, Gavlik rushed for a career-high 153 yards and notched his second 100-yard rushing performance of the season.

North Allegheny remains undefeated with the win and improves to 5-0 overall and 2-0 in the Tri-County Five Conference. Central Catholic slips to 2-3 overall and 0-2 in conference play. The Tigers will face neighborhood rival Pine-Richland in a non-conference matchup next week.